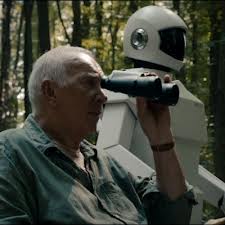 By the time this film first hit our main screens a few weeks ago I'd seen the trailer so many times that any minimal interest I'd had in it had virtually evaporated. But as it's now latterly been shown, for us 'oldies', in a single cheapo local screening, I thought "Why not?"

Frank Langella plays a one-time burglar and (still) incorrigible shoplifter who's done time for his crimes and is now living alone and starting to develop dementia. Set in the 'near future', his concerned middle-aged son presents him with a servant-robot to do all his daily chores for him and to offer advice about his health and nudge him with reminders. He is, predictably, initially hostile to its interference but soon realises that he may be able to use the robot, who apparently doesn't have any moral qualms, to revive his former criminal 'profession'. Romantic interest is provided by the always very watchable Susan Sarandon as a librarian former flame of his - and who, incidentally, looks nothing like the 20+ years older than she was in 'Thelma & Louise'.

It's a slight, rather quaint film, which is precisely where it was undoubtedly aimed. A few minor chuckles along the way, with one or two little excitements, but nothing more than that. I wasn't bored, though I did find myself longing for something a bit more profound, while fully aware that this was the wrong place to look for it.  Considering that the admission price was only a little more than half of what it would have been first time round I'm not complaining. Also, it comes in at just under 90 minutes - a point very much in its favour.