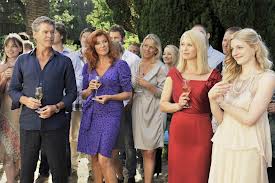 Two Danish film within four days - and this is a curious one.

Appearing rather oddly among a non-English speaking cast, Pierce Brosnan plays the widowed father of a prospective groom, travelling to picture-postcard rural Italy for his son's wedding where (actually at the airport) he is 'bumped into' by the wife-to-be's mother, whom he didn't know, on the way to the same destination. (Only in films!). She (red dress, above) is recovering from post-mastectomy chemo-therapy - and has only just been shocked when discovering her husband in delicto flagrante with a young female employee from his workplace. This husband turns up at the wedding venue, actually bringing along his 'affair'. Therein lie the tensions of this gathering which provide the film's dramatic impetus. But something major occurs two-thirds of the way through (which I hadn't foreseen), which skews events and shifts the central focus from the wedding event to the burgeoning relationship between the Brosnan character and the mother, Trine Dyrholm  - who is really very good indeed, with a lovely smile covering up her inner suffering on the two subjects of her cancer fears and her husband's infidelity.

Brosnan speaks only English, though appearing to understand all the Danish (a lot of it) addressed to him. Although in the role as father he does acquit himself quite well, displaying a spectrum of emotions, I can't help feeling he is a distraction in what is essentially a drama of two families. I think if a Danish actor had been used it would have been a stronger film, though I suppose Brosnan was brought in in the hope that he would give the film a better chance on the international market.
The 'event' two-thirds through, which I mentioned, left me a bit dumbfounded initially, as I thought it was a bit flip and cliched for 2013, but it was handled competently enough and succeeded in re-focussing the story onto the two main participants.

Btw: A strange co-incidence. A few days ago, Mitch @ http://mitchellismoving.blogspot.co.uk  posted a blog which included Dean Martin's song 'That's Amore', about which I added a fairly substantial comment. I don't think I'd heard that song since my first and only viewing of 'Moonstruck' in 1987, when it was used over the opening credits. Would you believe that at the start of this new film we once again hear Mr Martin crooning, to the lilting waltz, the words "When the moon hits your eye like a big piece of pie (sic) - that's amore!" Spooky!

I quite liked this film, though more in a sense of 'it ought to have been even better', but it was still quite good entertainment. Usually when my opinion changes from what I thought immediately following seeing a film to the morning after, it's a case of increasing regard for it. This time it's gone the other way. Nevertheless I'd still give it a slightly more than adequate...................6/10
Posted by Raybeard at 01:25