Firstly, a regretful situation has arisen in which, because of a change of screening times at my two most oft-frequented cinemas (both in Brighton and both 'art-house', belonging to the same chain)  the morning matinees, which I normally attend, have been shifted forward by 30 mins, which means that for at least one of these cinemas I'm unable to make it in time using my Senior Citizens' free bus pass. I would be able to manage it by taking the train but that would mean paying more than the actual price of admission in addition, which is something I'd have been willing to do had I money to spare, but as it is, it's not going to be possible. Even getting to the other cinema in time is going to be touch-and-go, leading to occasional wretchedly wasted journeys, I fear.
The change was made some weeks ago and already there have been a good six or seven films which I would ordinarily have seen, thus accounting for my failing to post anything here for a longer than usual interval.
I had actually, in any case, been considering winding down my attendances, and hence postings of reviews, either when I reached a specifically round 5,000 films viewed (some 340 still to go) or when I attained the age of seven-zero in 18 months time. Taken out of my hands, it looks like that situation may arise before either of these numerical 'landmarks' arrives.
Still, I shall dauntingly press on, though it looks as though the future films which I cover will be of a more limited range. Truly sorry about that, as you may appreciate. 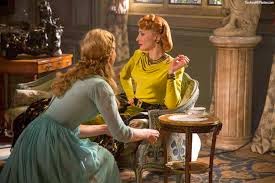 So to Kenneth Branagh's well-received 'Cinderella' - and yet again I find myself swimming against the tide. I found this a turgid affair. Eschewing the 'waistful' mention of liquid diets, it was, without doubt, gloriously visually accomplished. However, apart from Cate Blanchett as C's blisteringly spiteful stepmother, I found little to stave off the boredom. The two step-sisters were just too annoyingly daft for words. (Am I alone in thinking that there are few things as UNfunny as someone deliberately singing out of tune, while we are supposed to believe that they are trying their best?).
I found both Lily James in the title role and Richard Madden as the Prince insipid and forgettable whilst Helena Bonham Carter's Fairy Godmother was just plain irritating. (Two principal-minor roles are taken by Derek Jacobi and Stellan Skarsgard.)

The film faithfully sticks to the basics of the story with which we are all familiar, save for a moderately significant embellishment towards the end, though it all seems to be expanded, to its detriment, to the point of attenuation. It would have been much more effective at half the length; even a single hour would have more than sufficed.

Branagh's direction and swirling camerawork is done with the panache we've come to expect of him, while scenery, costumes and locations are as lavish and opulent as one could wish. The transformation of Cinderella, pumpkin and accoutrements was impressively achieved - the de-transformation at midnight even moreso.

I have to confess never to have been a fan of Patrick Doyle's music in any film where he's written the soundtrack score, and here it's distractingly upfront - though I dare say that those who were not put out by the negatives I've noted up to now may not notice it especially.
Praise has been accorded to Chris Weitz's screenplay though I didn't find it witty as some have said, and far less than the story deserves in order to keep it fresh.

I did go to a morning matinee at my closest cinema, and shouldn't have been too surprised, on entering, to be hit by a thick fug of sweet-smelling confections emanating from the purchases of scores upon scores of shouty kids, mostly adult-accompanied, including quite a number of toddlers and even a few babies. The din before the curtains went up was near-deafening, though I have to say that once the film started they were, for the most part, reasonably attentive (except for two instances of wailing babies, hastily carried out). It didn't really affect my 'enjoyment' of the experience, such as it was.