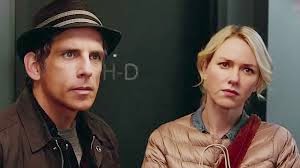 I thought I might enjoy this but it was not to be. My hopes were based on this being a Noah Baumbach film (writer and director) whose previous feature, 'Frances Ha', I liked. Also, it has an interesting cast - unless you're one of those who has a Ben Stiller aversion - here additionally with Naomi Watts, Adam Driver and Amanda Seyfried. In the event, after the first few scenes its slightly over hour-and-half became increasingly sombre in mood, resulting in the film seeming longer.

It did start quite promisingly with Stiller and Watts as a middle-aged childless couple, whose non-parental status is a recurring motif throughout. There's a certain staleness which has invaded their lives, but when they meet another couple twenty years or so younger than he is, with zest and enthusiasm for doing what they want, it infects their mood, waking them up as to how they ought to be living their lives to the full. The younger man (Adam Driver), stetson be-hatted, is trying to make a documentary of a certain encounter he's had and gets Stiller interested as he is also laboriously trying to compose a documentary film of an aged philosopher he knows, and getting nowhere fast. The older couple, particularly Stiller, are at first fascinated and almost smitten by the younger pair's easy-going relationship which they wish to emulate, though Naomi Watts has a more cagey attitude towards the younger pair.

There are a few moderately comic moments but they become rarer as the film progresses, until I thought, approaching the end, the whole affair became very heavy weather, with Stiller delivering a homily on truthfulness and trust, having discovered that the Driver character is not all that he was assumed to be. By this time I was stifling yawns.

Acting was okay, but for situations which could have delivered a number of bon-mots, I found the screenplay, by and large, pretty unexceptional.