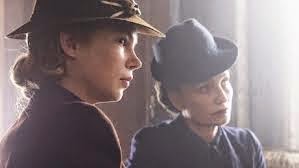 As someone who has become more than a little weary of war films, any war - most especially those set during WWII - I came to this hoping for something at least a little bit different, and in that respect it delivered, though without merit enough to make it outstanding.
Stories on film set during the start of the Nazi occupation of France are infrequent enough, so that alone kept my interest alive - just!

Michele Williams, who's made some rather good films already this early in her career, including 'My Night with Marilyn' - and here occasionally reminding me of (pre-transformation) Renee Zellweger - is the wife of a French P.O.W. held in Germany. She's living with her mother-in-law (Kristin Scott Thomas), fiercely resentful of the Nazi occupation of their small town, they representing the captors of her absent son. When the lieutenant of the German unit (Belgian actor Matthias Schoenaerts)  politely asks to be allowed to use one of their rooms as live-in accommodation for himself, her disdainful, but reined-in, displeasure is evident. Of course a refusal is impossible. The daughter-in-law gradually recognises the sensitive side of the German, and his playing and composing on their piano becomes the catalyst for their growing mutual attraction, it being a cat-and-mouse game to keep what's happening between them from the mother. The drama also involves an active local resistance fighter who has to go into hiding because of his patriotic, anti-Nazi activities.

Based on part of an unfinished work of Auschwitz-doomed Jewish writer, Irene Nemirovsky, the film seems reasonably complete in itself. All bright colours are removed. Speech is, for the most part, sensibly delivered  in unaccented, or only very slightly accented, English. Acting is good - though KST, wonderful as she always is, is here required to deliver a largely one-note performance.
Director Saul Dibb (who made the rather better 'The Duchess' of 2008) does well with his reliable resources.