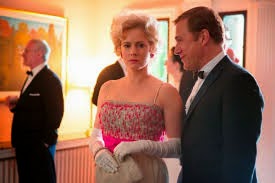 I was expecting that the curtailed frequency of my cinema-going (reasons explained in another recent blog) would result in my being offered mere 'crumbs from the table', with the films that I do manage to see being determined by what's available rather than those which I'd like to see or feel ought to be seen.  But if these 'scraps' all turn out to be as entertaining as this one then there'll be no complaints.

Actually released around Christmas time, this got a singular  one-off morning screening in my home town. It's an enjoyable and interesting caper (based on a true story, wouldn't you know?), never dull, and directed in untypically restrained fashion by that reveller in flashy shots, Tim Burton.

Set in San Francisco and starting in 1958, Any Adams (first class) is a divorcee with a little girl who bumps into Christoph Waltz (also very good) when they both happen to be merchandising their respective artistic talents to passers-by - she painting urchin-esque children with exaggeratedly huge, round eyes (sometimes with a cuddly animal), he displaying Parisian street scenes. They hit it off straight away and go for a quick marriage. By accident one day an admirer assumes that he is actually the artist of a painting hanging on a wall which was actually hers, and he goes along with the notion without realising the full potential. He tells her about it and, dawning on them both, though she more reluctantly, plays along, both spoilt by how lucrative the little wheeze could transpire. And it turns out to be exactly that, her paintings in his name becoming a national phenomenon, quickly bringing them riches of which they'd never dreamed. You may well guess that she pretty soon tires of her own talent being palmed off as someone elses while he takes all the credit and gets the kudos - and their relationship sours.
Supporting cast, including Danny Huston and Terence Stamp, are also very fine, as both always are.

If it tips over towards ludicrousness towards the very end, it doesn't spoil the whole film. Besides, for all I know, this may be precisely how it did happen.
It got me in such a good mood throughout that I could even almost forgive the one song on the soundtrack - but only almost.
A good, unsensational film. I'm still feeling a bit of a glow as I go out now to see my second film of the day. For this one, though, an easy.........................7.5.
Posted by Raybeard at 06:17