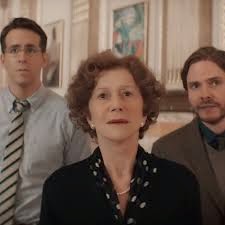 Another film, this one unexpectedly severe-toned, based on a true story!
Dame Helen Mirren, who never seems to be out of work, appears in this drama involving the reclaiming of an unusual painting, (incorporating gold-leaf effect), by Austrian Gustav Klimt, under the assumed title which is used for this film. This family-heirloom painting (actually of Mirren character's aunt, whose name is the work's true title), having been removed from her home by the Nazis after the Austrian 'Anschluss',  it remained post-war on public display in one of Vienna's principal art galleries. Mirren is resolved to get it back into her possession in L.A. where she now lives, enlisting the assistance of attorney Ryan Reynolds, who happens to be the grandson of influential composer Arnold Schoenberg. (Did you get all that?)

I thought the film rather stodgy in execution, over-serious and heavy-going with little to lighten the mood, most especially in numerous flashbacks of the young Maria Altmann's (the Mirren character when a child) Jewish family life during the German invasion, starting with house arrest. There are a few fairly distressing scenes of the public humiliations of Jews, though as Maria manages to get out before things reach their extreme depths, we don't see anything of their later horrific fate. Nevertheless the mood is unremittingly grim.
Even in the present-day legal scenes, first in Vienna and then in America, as Maria and her lawyer have to jump through hoops to achieve her dream, it all remains very sombre.

Helen Mirren, retaining an Austrian accent, is as good as we've come to expect.
Director Simon Curtis had exhibited for me a better, more assured, touch with his 'My Night with Marilyn'.

Incidentally, reading the film's credits just now, I see that what stood in for Vienna's airport was, in fact, our own local Shoreham airport, just five miles from where I am now sitting.

This is a film that takes its subject with a seriousness which, arguably, it merits. However I think it was less 'entertainment' than history lesson. Although I was aware of the work of art in question, I had no idea of its story, so in that sense it was an education. But I didn't exit the cinema thinking "Wow, that was worth the effort!" even though on one level it had enlightened me. The truth was that I felt rather weighed down by the  story and came out longing for some light relief...............................5.5.
Posted by Raybeard at 11:51