This is my kind of film - and it's an absolute cracker!


When it opened a couple of weeks ago in this region it was showing at such ridiculously inconvenient (i.e. late) times I was distraught to be missing it in the light of the practically unanimously positive reviews it had received. But the gods heard my prayer and unaccountably, it being neither a blockbuster or of 'popular' taste, brought it to my home town for a limited showing. And was it worth it? YES and double YES!

An Argentian film, a compendium of six separate, unconnected stories played out sequentially, written and directed by one Damian Szifron, clearly a talent to be watched.
The tales do, in fact, have something in common - they all involve circumstances spiralling out of control and downwards, some of them unconsciously triggered by the most insignificant happening or strange coincidence. Even the one that begins with a tragedy descends ever deeper into the mire.
One might expect that the individual six stories would be uneven in quality. Maybe they are so, but not by a huge margin - and each is vastly entertaining, never boring for an instant.

Special mention must be made of the first one, which is the shortest (and also pre- the title credits) which, unknown to the film-makers at the time (completed last year), uncannily and closely predicts a horrific event on everybody's news just a few weeks ago. It's one hell of a chilling start, and if the film had been made after that particular event it would certainly have been dropped or the story altered. Of course it's pure coincidence.

Each of the tales has an edge of black humour to it, to which some may not be in tune. Myself, I laughed aloud several times during the two hours, which seemed to fly by.

The grisliest story is a section which only features two motorists. Talk about events 'snowballing', this caps the lot! - and it's rounded off with a killer (if you'll excuse the word) of a final line which just had me in stitches despite the most macabre of scenes.

Others include - a guy's reaction to being charged with a common parking offence which escalates out of all proportion; a customer arriving at a restaurant and being recognised by the waitress holding a long-term grudge; a tragic motoring accident with an attempt to cover the truth of the driver's identity; and, in the final segment, a wedding reception such as never before.

My only very slight reservation is that one of the stories (or, arguably, two) ends on a bit of an upbeat which, I suppose, is intended to act as a counterpoise to the rest. I would have found it more satisfying if they had all ended in the depths of hell, but maybe it was felt that that would have been expecting the audience to accept more than it was capable of doing. But it's by no means a serious criticism. 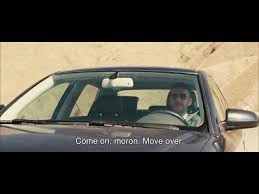