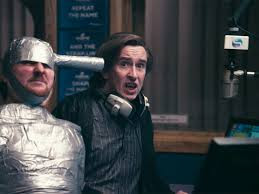 I got a lorra laughs from this one, more than any film of recent years.
I've been a huge fan of Steve Coogan's Alan Partridge character since he first appeared on radio 20 years ago, then shortly afterwards on TV, as the self-absorbed, gormless, foot-in-mouth, obnoxious chat-show host - whose world shrinks around him while his ego refuses to
downsize accordingly.

Here he is back on original territory as a Norfolk Local Radio D.J. offering brief homilies and 'pearls of wisdom' to his listeners - until one of his broadcasting colleagues (Colm Meaney) is given the push, something he himself helped to bring about, only to find himself at the centre of a hostage siege when said victim decides to exact vengeance for his mistreatment.

I'd already seen the trailer for this film several times before and must admit that my heart had sunk because it looked like another of those cases where, in transferring a TV character to the big screen, it was opened up to such an extent that the whole reason why the original had been so successful is lost. A bigger budget doesn't always result in bigger laughs - in fact it's quite the reverse more often than not - but not so here. Actually it did take me about a quarter of an hour to get 'warmed up', but from then on it was laughter just about all the way - and on at least two of the 'episodes' side-splittingly so.  The success of the film also gains from it being a neat 90 minutes long, thereby not outstaying its welcome.

I can't say how it will play to those who don't know the Alan Partridge character from TV or radio, but I'm reasonably sure that they will also be amused. Whether the film will carry well outside the U.K. is also open to question, though much of the humour is earthy and universal. It may help to have a prior favourable disposition to wanting to like it, which I certainly did have - and I was in no way disappointed.

I'm tempted to score this with an '8', but sitting back and looking at it detachedly, I wouldn't want my verdict to be disproportionate in relation to some of the other excellent offerings so far this year. I think it will still finish in my 2013 Top 10 even if I give it a .........7.5.
Posted by Raybeard at 00:22