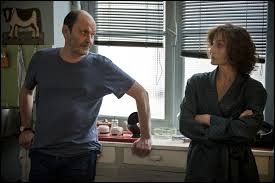 Can't help feeling that this ought to have been more absorbing than it was. All the ingredients are there, with Kristin Scott Thomas doing her increasingly frequent Gallic turn again.
﻿In this Paris-based film, she plays half of a relationship which has gone stale, they having one foul-mouthed and cheeky brat of a young son, who is particularly concerned with his mother's heavy smoking. She then embarks, at first reluctantly, on an affair with with a much younger male member of her theatre group.

But the main focus of the film is on her partner, Jean-Pierre Bacri's lecturer on Oriental social attitudes and conventions to business men and women whose employment takes them eastwards. He has a prickly relationship with his father, an influential judge, whom he tries to persuade, or at least make time for, a case of a young lady he only knows by name but is in France illegally and at risk of being deported. He coincidentally meets a young 20-year old female on the street and is captivated by her. Need I say more? I think not.

I found it all a bit on the dull side. The best parts for me were the main character's continually frustrated attempts to reach his father and persuade him to give time to considering his 'case'. There is also a slight and sometimes amusing gay angle, but I wouldn't give that aspect undue importance.