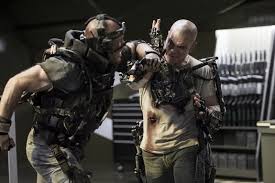 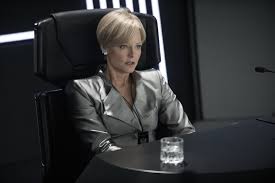 Well, blow me down! At last a film without either Helena Bon-bon Carter or Kristin Scotch-egg Thomas! (That was for you, J.G.!)  Was beginning to surmise that it was obligatory to include one or t'other. But pray don't get me wrong. I do especially like.....well, one of them.
Btw: Did you realise that if the former had a second given name of Susan, Sheila, Sandra etc - as she might well have, for all I know -her initials would be.....HSBC? - Surely an actress one could bank on to give a sterling performance.

Notwithstanding a fairly sniffy review on BBC Radio 4 a couple of nights ago, I enjoyed this.
One thing Jodie Foster could never be accused of is being over-exposed. It's always a particular pleasure to see her, made even moreso by her appearances being so relatively rare.
Here she is, in her trademark act of steely, blinkered determination, which she does so well. Pity that her on-screen time in total is not considerable - and she doesn't share any scene at all with Damon.

The story is set in mid-next century, the over-populated earth having become little more than a rubbish dump, with its inhabitants scrambling about like ants to survive and eke out a living, determined by those lucky enough to be living apart.
These very affluent people live outside this hell - by emigrating to a huge, earth-orbiting space-station (named 'Elysium') containing all the earth-known luxuries, with plenty of 'stretching space' to boot. (There's more than a slight resemblance to South African director Blomkamp's equally enjoyable 'District 9' of 4 years ago. Both feature parallel 'societies' as well as lots of robots. )
I found the visuals particularly impressive (I saw it on a BIG screen) with details reminscent of '2001 - A Space Odyssey' of nearly 50 years ago, when C.G.I. was still an impossible dream. The congested-earth scenes, shot from above, are also remarkably effective.

Matt Damon shows again why he's one of the very best actors of the currently middle-aged generation, though in this the emotion is almost exclusively angst-driven in him being a lone, self-sacrificing hero (with added physical features in the way of 'attachments') against a motley of villains, and culminating in the predictable climactic fist-fight with the arch-baddie. Of course if one strips away the science-fiction and the gadgetry it's a very formulaic story, but I was nontheless impressed. There's also an 'uplifting' sentimental coda. But apart from that it was pretty much action all the way.