Film: 'THE PLACE BEYOND THE PINES' 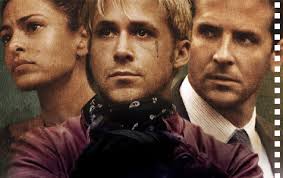 Reasonably effective drama - in three parts of roughly equal length.
First, involving Ryan Gosling, as a stunt motorbike rider, simmering like a volcano ready to erupt violently at the slightest provocation, allured into robbing a bank and quickly getting a taste for it and embarking on a robbery spree so that he can support his estranged lover and their one year-old son..
Second, Bradley Cooper as an honest policeman who unknowingly gets pulled into a corrupt cop circle - and who then extricates himself by framing others, while not averse to pulling a fast one himself to advance his career.
The third segment, 15 years on from the last, mainly concerns the now teenage sons of the main characters in the first two parts, from whence disturbing consequences follow.

I found it quite an unsettling film, which it was surely intended to be, never knowing which way it would turn. Hardly anyone in the current generation of film big-names can simmer as dangerously as Ryan Gosling, and this he does to perfection here. With him around I was quite concerned for the welfare of a dog which features in a little of this first part, but it turned out that there was no need to worry.
The connection between the first and second parts is incidental but it turns out to be a strategic one, coming to fruition in the third and, for me, the weakest part. Bradley Cooper, plays his inner-conflicted yet risk-taking part every bit as well as Gosling. Eva Mendes does well to hold the three parts together.

There has been a significant number of recent films which have come and gone but which I badly wanted to see but, through circumstances, I wasn't able to attend. When I saw the reviews of this one I felt it could be something remarkable so I really had to make a super-human effort to go, despite having to limp over a mile X 2, and only returning at dusk. In the event, although feeling that it was pretty good, it hadn't quite merited all the strain and pain I'd put into seeing it. But I'm reasonably satisfied that, at the very least, my curiosity was satisfied................................6.5/10
Posted by Raybeard at 23:58