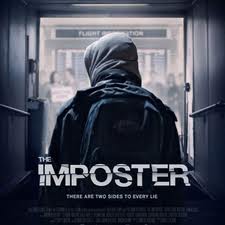 This is intriguing. Story of a 13 year-old Texan boy disappearing without trace, only for three years later a claim to be made that he is alive in Spain.
Difficult to say much about the film without giving away those parts of it that made the journey from A to B so engrossing, the title alone revealing the tale's destination.
I must own that the first half-hour got me a little exasperated, such that I was saying to myself "Oh, come off it! Can people really be that gullible?"  I was even beginning to think that the film-makers were sniggering up their sleeves while attempting to hoodwink the audience. If it had been fiction it certainly would not have worked, with the audience laughing at its absurdity.

After the opening third or so I started being drawn in and was soon hooked. As the titular 'imposter' embellished his already preposterous tale with even wilder claims it begins to get so surreal that one looked forward to someone who was going to inject some sanity into proceedings, which duly happened.
If there is anything to be learnt from the story it's the extent to which some people will twist or totally ignore hard evidence put before their very eyes in order to avoid facing the possibility that their belief might be erroneous. It's as though what they want to believe is so bound up with their own identities that any attempt to shift that position leaves them feeling exposed and vulnerable. So they cling onto their belief as a 'safety net' in order to maintain a feeling of security. (It's probably plain that I'm seeing a parallel here with politics and religion - an analogy which I haven't seen made in any of the reviews of this film which I've read to date, though I maintain it is a valid comparison).