My 'Pussy Drop-in Centre' flourishes, while I have to scrimp!

Meet 'Patchy', the latest 'regular'. Started coming here about six weeks ago, he now comes in twice a day most days, and with an appetite equivalent to two. 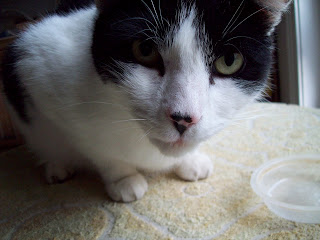 His 'real' name is 'Jack', but I don't think it's pussy-ish enough, so I call him Patchy, to which he now responds.
At least, unlike with Ginger, his true home is known. Some weeks ago leaflets were put through houses in the neighbourhood enquiring about his whereabouts, with address and telephone number. He answered to the description given so I contacted them. His house is around the corner, maybe 300 yards away, and it's a couple who are mad about their cats, having several which they've got from rescue homes. Apparently a number of people have also been in touch to say they've seen Patchy around. He seems happy calling from house to house, at least until the weather turns downward. So they are regarding him now as a 'community cat', with no fixed abode (though he does have one), but say that if he causes me too much trouble for me to let them know.
My own two (or three?) regard him with some respect, though also with a little suspicion, maybe because he's bigger than any of them - and he's not backward in hissing at them (and me) to let them know who is boss if he's pushed too far. But he's another big sweetie. 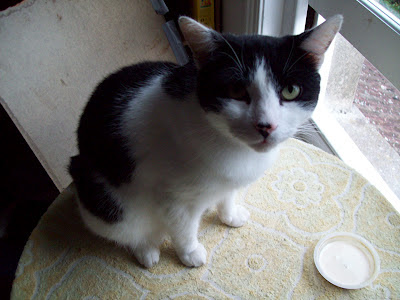 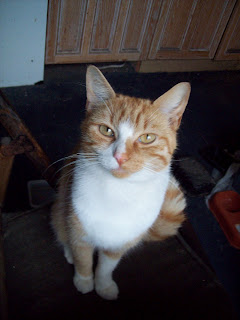 Looks like Ginger has decided to move in. He can't be much more than a year old now - and I've still no idea where he comes from. He may well have been homeless since birth.
Apart from being a little scamp who takes delight in annoying Blackso and Ginger, I will reluctantly take him in as the only option seems to be shut him out, which would break my heart. But the big problem is that he has not only not been neutered - while my other two and Patchy have been done - he hasn't been registered with a vet, which is yet another expense I can do without. Anyway, for the first time today, and with a hint of Autumn in the air, he slept inside after I made a 'bed' for him on a low shelf in the kitchen.


There are still another two or three infrequent visitors, who seem to go in phases of turning up regularly then disappearing for weeks or even months on end. Can't turn any of them away, of course. 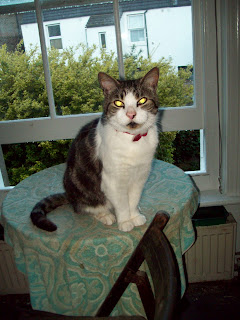 Meantime Noodles and Blackso carry on as before. Neither of them has ever been ill in the 8 and 12 years respectively since they decided to move in with me, which has been a blessing........ 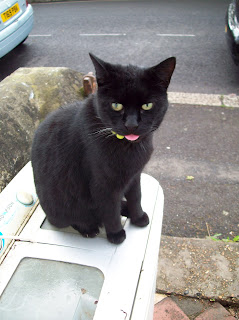 .....even if Blackso shows his appreciation by occasionally poking out his tongue!