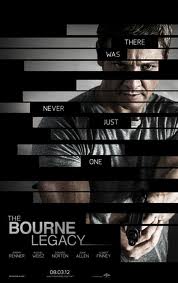 My first cinema visit for over three weeks (an inordinately lengthy interval for me) felicitously slipped in between the almost continuous 'highs' of the Olympics and the hoped-for euphoria of the impending Paralympics.

Matt Damon-less sequel to the rather good 'Bourne trilogy'. Jeremy Renner acceptable as the 'moving target', though he labours under having conspicuously lived-in features whereas Damon's bland physiognomy could be lost in a crowd, which would be an advantage in this role..
Rachel Weisz emotes as per the instruction leaflet. Edward Norton as usual, never disappoints, though here his know-it-all authority figure hardly stretches him.
Some of the several chases are good fun and did get my adrenalin flowing, at least up to a point. Renner not hindered at all in speed or versatility despite carrying a backpack. Very impressive. His character also displays bottomless initiative in outsmarting his pursuers, which is what is only to be expected in an action film like this.
I'd lost the thread of the plot within the first quarter hour - and therefore the attempts during the film's course to flesh out motivation and strategy were lost on me. I don't think I'm alone. In fact maybe the majority don't bother with keeping up with what's going on, which makes those sagging longueurs of explanation all a bit unnecessary. But I suppose if they don't attempt to give it a veneer of plausibility some critic or other is going to pounce. However, once again my frequent complaint comes up - why make it so difficult to hear what the characters are saying, especially if it really is that important? But I know I'm onto a loser just by posing the question.
All in all, a fair enough romp to wile away a couple of hours entertainingly enough. One of those see-it-once-then-forget-it films.