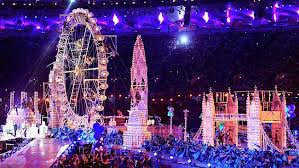 Granted, coming as a farewell to the most enjoyable Olympics I've ever experienced (and I can remember as far back as Rome 1960), this ceremony had to be something extra-special - and, in many respects it was.
Part of my very high opinion of the Games generally may well have been because of its location, which certainly helped - but that wasn't the full reason.

The re-creation of the London skyline, above, in illuminated model form was totally and breath-takingly astonishing - 'London Eye' (the giant Ferris Wheel), Gherkin, Battersea Power Station (as was)..... et al!


Now the closing ceremony's  'buts', plus one or two positives:-

Too long by half.

(I liked the accurate, if over-fussy, reference to the attendance of of Prince Henry).

Some of the acts too insularly British to be appreciated internationally - e.g. I'm a great 'Madness' fan, but singing 'Our House'?  Similarly, 'The Who' chosen, of all acts to close? Well, at least it wasn't Jesse J coming out for the fourth time, so that was a point in its favour.

George Michael - 5 minutes would have been quite enough, thank you.

Ray Davies singing 'Waterloo Sunset' - a sublime song encapsulating a very parochial Britishness - coming from an era when 'The Kinks' were one of the very great 'supergroups', at the same time as 'The Hollies' and, yes, 'The Who' too - as well as 'The Stones' and....well, you know who. Maybe his little act worked, maybe it didn't.

Spice Girls - must confess to an inner thrill at seeing them together again - yes, on balance it worked. (Geri now surely the skinniest of the lot, even moreso than Mrs Beckham!)

Pet Shop Boys - I wouldn't have minded a second ditty from them.
Similarly, our dear and incomparable Annie Lennox, but without all that suffocating, encumbering drapery in a second song.

Eric Idle - well, they had to have a 'Python' spot, didn't they? And it did lighten things up a bit.

Emili Sande not only opening the show but appearing again later (what the hell was she singing about? - on both occasions! I couldn't make it out.)  - though at least it wasn't as OTT as Jesse J popping up for no less than THREE times, for goodness sake - when I just had to start flicking channels. You'd think she was Princess Di the Second!

Russell Brand surprisingly good singing 'I Am the Walrus'. Didn't know he could carry a tune - and pretty well, too.

'Imagine' worked well despite it having been heard to death for too many years now. I actually found it quite moving.

Elton, conspicuous by the absence of any acknowledgement of his music - or did I aurally 'blink'? - whereas Bowie (who's had a shorter 'shelf-life', though I'm not complaining!) gets a whole section, linked in with British fashion.
Btw: I wish someone had tried to throw a mobile at that annoying, spoilt brat of a woman, Naomi C., - which I sincerely hope would have missed, of course ;-)  - and who thinks that growing up and acting her (advancing) age is, oh, just TOO much hassle! - and whose only talent, as far as I can judge, is the ability to cross her legs three times over the back of a guy as he's humping her.

Lord Coe, as in his Opening Ceremony speech, going on too long again, but not helped by the crowd cheering after just about every sentence, as though he was an American Presidential candidate. Maybe they should have done the same as they do at the Oscars (or is it the BAFTAS?) and start playing music to drown him out after he's been talking for two minutes.

I'll think of other things later, but this is what's coming to mind during a morning after a night of inadequate sleep. But there you are - my thoughts are on record.