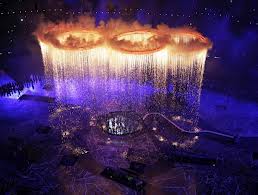 Even before the very start I was already a bit irritated at the late hour for which it was programmed. (Was it really because of the fireworks, or did the sponsors want it shown at a time more suitable for North American viewers?) Within minutes of its commencement I was thinking "Oh dear, this isn't working". I was aware of the general thrust of the history concept but if I wasn't sure exactly what was supposed to be going on, what was the rest of the world supposed to think?" This went on for about half an hour before I  began to be drawn in.
The consecutive set pieces seemed to be choreographed more with the stadium spectators in mind than for TV, and there was nothing wrong with that - though witness the close-in shots of individuals or groups acting in manners which looked distinctly odd, which in a 'big picture' would have made more sense.
Kenneth Branagh's turn as a Brunel-like figure badly misfired, but the forging of the rings was quite breathtaking - and a number of the other ideas were alternately quaint, humorous and intriguing. (All those Mary Poppins!)
Mr Bean's appearance was fine - but too much of him.
James Bond was great, if inevitable - and, of course, the 'piece de resistance' of the entire evening was Her Maj participating in a spoof. Right up to its actual happening it would have been regarded as unthinkable and is, rightly, much talked about this morning. Certainly the biggest surprise of the night.
Arctic Monkeys & Dizzee Rascal? Well, someone must be fans of theirs!
Evelyn Glennie making her much valued percussive contribution. Macca not in best voice, but look at his age - even older than I am! His attempts to get everyone singing along to the 'Na na nas' at end of 'Hey Jude' seemed to get indifferent results, though it may have sounded better in the stadium.
The paean to the National Health Service was a brilliant piece of cheek, if quaintly idealised (as was the brief slotting in of that lesbian kiss). Can't help imagining the outraged faces, disgust and shocks of horror in some non-British commercial concerns, and overseas capitalists generally, at this 'disgraceful' and 'blatant advertisement for Socialism'. Well, tough titty to them!
My eyes started welling up right towards the end when I saw who was comprising the team carrying the Olympic flag. Lovely choices!
Speeches at end somewhat too long. If only they'd copied what the Queen (looking rather uninterested throughout, even a bit grumpy) was going to do, and read out from a small scrap of paper.

I eventually retired over three hours later than my usual bed-time but was glad that I'd stayed up. It was something to be experienced live.
Full marks for imagination, for daring to show some irreverence in what has become a rather starchy, po-faced and formulaic event, albeit previously always with some jaw-dropping, though predictable, demonstrations of mass synchronicity. I liked the 'rough-round-the-edges' approach - with even some roughness at the heart!