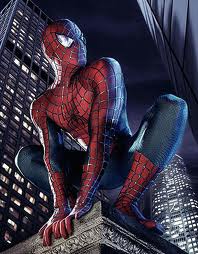 At the outset I ought to say that in order to catch this film at under half the usual admission price I saw it at a morning showing, in 2D, and on a less-than-large cinema screen. Clearly, then, it wouldn't have the visual 'punch' that it was intended to have. But as I'm not one easily swayed by effects which are essentially only just so much froth, it did enable me to view the film the better for precisely what it was - at least that's what I want to think.
I wasn't more than moderately entertained - though, on the other hand, never really bored. What I thought there was a shortage of was humour, only occurring in two short scenes, the second such, very brief. To carry off comic-book heroes successfully, I think there has to be a large tongue-in-cheek element. When it takes itself too seriously it all becomes rather ponderous.

Andrew Garfield was at least adequate for the part. Everyone says he makes a better go of the portrayal than Tobey Maguire did, and I wouldn't disagree. Pity that the estimable Martin Sheen, rarely seen on the cinema screen now, should have his character disposed of so early in the film. But Sally Field as his widow was good - as was Rhys Ifans. Shame also that the film seemed to degenerate into a Spiderman v Godzilla-type monster for so much of the final part, with all the expected technical effects thrown at the screen, to which I can only say "So what?".
Btw: Was it just me or did I miss it? Was a major strand of the plot left unresolved - or was that being kept back for the next instalment? Maybe my attention wavered at a critical moment.

All in all, not too bad, but not really a film to lodge long in the memory.