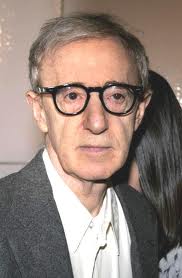 I imagine that very few of those who do not count themselves as Allen aficianados will fork out money to see this. It's practically a hagiography, long at 2 hours, and less a documentary than a succession of talking heads -  Diane Keaton, Martin Scorsese and Allen's own sister, as well as Woody Allen himself, being among the most prominent - all interspersed with brief excerpts (some very brief)  from about half the films he has directed. It told me very little that I didn't already know. In fact I can't think of a single thing right now. And yet..........I really liked it a lot!
The acrimonious split with Mia Farrow is acknowledged with more than just a passing nod, when I was expecting it to be ignored or just glossed over. Pity that Farrow herself wasn't willing to talk about her working experiences with him when several of his films which she starred in rank among his very best.
I shouldn't think that people who don't care for his films will be as absorbed as I was. I've always been a very enthusiastic fan, having seen nearly every single one of  the 40+ films he's directed on the cinema screen when they were first released. His films really are that much of a big deal for me. (The sole one which, so far, has got away was the 2002 'Hollywood Ending' - and I've only ever seen the 2006 'Scoop' on TV.)
I'm willing to accept that his films vary in quality, but even at their worst (at least according to critics and other viewers) I've never found a single one of them at all boring - and, furthermore, there isn't one which I wouldn't watch again - several of them time after time. Apart from the very early 'slapstick'-type films, they are all very 'wordy'. Dialogue is paramount. One hardly looks to Allen for 'action', but it's the high-quality, highly-charged - and often funny - conversation which I've come to expect from him and he very nearly always delivers.