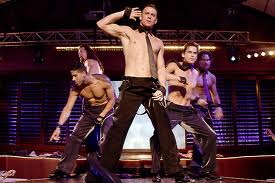 Feel very ambiguous about this film. Truth to tell, I suppose I only give it the benefit of the doubt because it's a Soderbergh film, whose previous efforts I've usually liked, or even liked a lot - otherwise I might have branded this one as 'DISlikeable'.
Revolving around a male-stripper (for women) group which takes on a new....erm.... member, the latter starting out as a reluctant participant, though soon finding his stride, and thus (predictably) shifting the group's own internal dynamics - and all presided over by the surprisingly impressive Matthew McConaughey, strutting about like a know-it-all peacock.
Several of the group's striptease acts are shown, all skilfully choreographed - and with them having bodies to die for - though I must mention that in none are their pouches/thongs finally removed. Even aside from that they are not exactly The Village People, being aggressively hetero, though the unacknowledged hint of homo-eroticism wouldn't escape most people.
I found the film largely a vacuous experience while watching it, not being able to sympathise with any of the characters - and yet, this morning after, certain scenes are still buzzing around the brain. Perhaps I'll have to wait for the memory to settle down.
In the meantime, reflecting my ambivalent feelings, I award it a score of - 5/10.