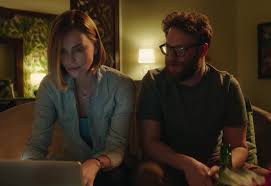 Intermittently amusing 'odd couple' comedy, the 'odd' being 'very' - she (Charlize Theron), currently Secretary of State aspiring to be the first female American President, he (Seth Rogan) an oafish, unkempt former newspaper reporter, recently become unemployed.
It requires an enormous stretch of credibility to accept that her outward persona as poised, elegant, capable, reliable and professional could fall for this plain-speaking, careless of appearance, bushy-bearded, down-to-earth younger man, but this being a comedy, it happens when their eyes meet across a crowded room, she then discovering him to be someone she knew when he was barely adolescent. She takes him on initially as speech writer, there being understandable considerable consternation from her close staff at their proximity and developing rapport. He accompanies her as part of her entourage on overseas travels, his presence becoming increasingly evident to all - and meantime their personal relationship deepens.

It's full of rapid talk, much of it being too fast for me to catch, though some in the audience could, and found it very funny. In fact the whole film was generally better received than what I could muster for it, though I must say that it did maintain a fair entertainment level even if I could have done without the soppy ending.

Incidentally the film's opening scene, atypical of the rest, was something which I found teetered on the very edge of sheer unpleasantness. I suppose its inclusion was as an antidote for, and to point up, the comedy which follows.

Director Jonathan Levine has yet to become a well-known name. The success so far of this film may well be impetus in that direction............6.