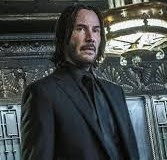 I never saw Chapters 1 & 2, not even recalling them coming out - but if I had would it have made any difference? Probably not.

Although in this one I hadn't the foggiest idea of what was going on other than gang upon gang of hit men desperate to put out Keanu ('Frozen Face') Reeves' lights,  can't see this appealing to any but aficianados of bone-crunchingly violent combat - and there's quite a number of them here to 'savour'. all pretty extended - guns (shootings directly in face and skull from two inches away), blades (of various sorts) and fists/feet, just about everything is covered - and with all combatants, including 'Frozen Face', getting up time after time no matter what the injuries, resilient as zombies -  comic book stuff. If this is your 'thing' you won't come out feeling short-changed in this two-hours-plus film. However, if you were hoping, like I was, to see some intelligent content and context you are more liable to conclude it as being just an empty, repetitive, ho-hum show.
Quite why actors of the calibre of Halle Berry, Laurence Fishburn, Anjelica Houston and Ian McShane decided to get involved in this forgettable mess, is an enigma. I can only assume they needed the dosh.

Director is stuntman Chad Stahelski, whose only other claim to 'fame' is also having directed the first two chapters of this same franchise. I see no reason to think that this latest addition is any different in nature from those earlier two - and there's the clear indication at the end of this film that there's going to be yet another chapter (which I must remember to miss!) But just look at the ratings others are giving this low-level disorder! I'd sooner sit through the whole four hours of Eurovision again - including Madonna! Pah!...............3.