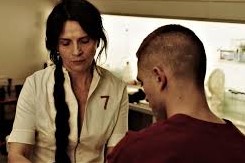 Too many distressing images and moments, some really grisly, in this set-in-space tale for me to say that I 'enjoyed' it - a few of which, though brief, involved dogs. As ever, anything involving animals suffering cuts particularly deep with me, though there'll be others who can put such behind them with greater ease. That aside, I had a pervading feeling that the film was attempting to be profound, presenting a mystifying set-up and denouement covering what was ultimately rather hollow.


Robert Pattinson is one of a motley bunch of travellers spending years en route (one-way) to a black hole, at a speed close to that of light, relaying information back to Earth on what they witness and encounter. They are a curious lot and it's never fully explained why they come to be passengers, it looking like a kind of sentence for committing some crimes? Pattinson has a baby daughter as co-traveller, clearly born recently on the voyage (the mother? I don't know) who consumes much of his attention which he shares with the cultivation of an on-board garden  (in the manner of the 1972 film 'Silent Running'). Also on board and mysteriously caring for (and exploiting?) the 'passengers' physical attributes is medic/nurse/scientist Juliette Binoche who has some degree of authority over the others.
There's a fair bit of sexual activity of a kind (including an attempted rape), something which is rarely, if ever, addressed in space films, though it's a reasonable inclusion given the long periods of time involved - though none of it is particularly 'pleasant'. Of course with a number of passengers forced to live in close proximity to each other for interminable lengths there are incidents of friction between them, occasionally turning to physical violence.

It's not a big-budget film. The few scenes in outer space look fairly routine, nothing special, the essence of the drama being the psychological interplay between characters.

Director (and co-writer) is the French Claire Denis, my age and with a considerable back catalogue, none of whose films I believe I've ever seen. She also has a minor acting role in this film. If you ever thought that a female director, especially a 73-year old, would be liable to go easy on the violence, think not so. Denis proves that when it comes to portraying brutality and blood-letting action she is every bit as capable of not holding back as any other.

This is obviously intended to be a hard-hitting film. If it is then too many questions got in the way for me to appreciate it, in addition to those distractingly upsetting scenes, making me wish I hadn't been to pay to see it. But it's competent enough and I'm sure there'll be those who thought "Wow". Just don't count me among them.................5.