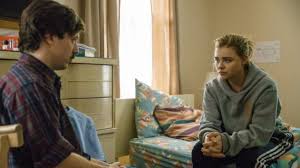 This had the potential to be something exception-al. Not only because the subject matter has, as far as I'm aware, not been addressed in a feature film before - viz. the attempted 'conversion' ('correction' they would call it) from homosexuality to 'normalcy' by a Christian group -  but also because there has never been a better time than now, with the dreadful prospect of such a practice's active advocacy being pushed by a Pence Presidency looming over the horizon.
Shame, then, that for me the promise didn't quite meet the opportunity presented by the premise. Double shame that much of my disappointment stemmed from that old bugbear of mine, poor and lazy diction, and especially galling when most of it comes from the film's main star, Chloe Grace Moretz. Oh, what I'd have given for subtitles when, in a conversation, all I can make out is one half, and left guessing as to what it was she actually said. What a needless scar on the film! The only 'biggish' name here is Jennifer Ehle who, even when she talks quietly, one can still hear what she's saying.

Set in 1993 (in some state location I can't find), Moretz, orphaned and living with parental guardians, is discovered having sex in a car with a teenage girl of similar age and is whisked off to 'God's Promise', an isolated small institute with around 10 'inmates' of both sexes and roughly similar age, run by Ehle, assisted by John Gallagher Jr who, were learn, was also subject to same-sex attraction but, with God's help he 'overcame' it (Hallelujah!) - or so he claims (Hah!). Ehle, as the resident 'governess' of sorts, is superficially oh-so-understanding but steely underneath. For me it wasn't established whether all the attendees were there for the same reason. I surmise that they were though it wasn't obvious. They have group sessions with half a dozen together, Ehle presiding, encouraging them to talk about their innermost feelings, as well as having one-to-ones. During the night an unidentified torch bearer makes the rounds, presumably to ensure there's no hanky-panky going on - including, one presumes, solo efforts.
Moretz has flashbacks and fantasies about her Lesbian affair(s), her own lack of faith in a God not facilitating the prescribed 'healing' process. She makes particular friends with a young woman (Sasha Lane) and a young man (Forrest Goodluck - who, I think should be turning heads in a few years' time) and the three of them go on regular hikes together.

All the ingredients of an unusual and good film are here but somehow the target isn't quite hit. There's no attempt (nor should there be?) to show the misguidedness of the institution, though it's clear where the makers' and writer's sympathies lie, which is not with the Church.
Based on a novel by Enily Danforth of her true-life experiences, director and screenplay-co-writer, Desiree Akhavan keeps it all very much low-key, there being just one moment of heightened emotional tension - apart from the sex, that is, which is not in any way explicitly shown.

Although I did like the film I came away feeling strangely unfulfilled, the ending coming unexpectedly and leaving me, unusually, with the tantalising question of "So what happened next?"
I might have scraped by giving this a rating of '7' but I really must register a penalty half-point minimum for Moretz's hopeless,  annoying and unthoughtful lack of clear diction. So I'm afraid it's a................6.5.