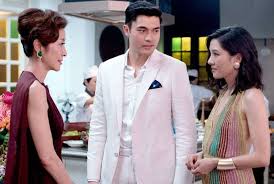 Set aside the Singapore location. More importantly, look beyond the fact that the entire cast is of east Asian descendancy. What you have is a fairy tale story of brazen unoriginality, complete with every cliche in the book, including suspicious family matriarch (the luminous Michelle Yeoh - above left), flighty best friend and a campy, gay brother (the latter two both thrown in for a bit of 'comic effect') - and all concluding with the corniest of endings which I only stayed for in the forlorn hope that they wouldn't opt for the obvious, predictable, happy ending - and a forlorn hope it was.

I was bored rigid within half an hour of the start though, to be fair, it did warm up a teeny bit now and again, though it couldn't sustain my interest very far.

Constance Wu and Henry Golding, having met and 'gelled' romantically in New York travel to Singapore where she meets his family, being completely unaware of his fabulous wealth which the family acquired through playing property. His mother (Yeoh) is formally polite to the new arrival but restrains herself from giving full-hearted approval towards Wu as a potential daughter-in-law. Golding takes Wu on the rounds of extravagant functions where conspicuous wealth and affluent guests are paraded as if it's all routine and no big deal, a world which is all new to her, of course. She had no idea that she had become involved with one of the world's most eligible (i.e. good-looking and rich as Croesus) bachelors, and it's not long before she finds out what other women at these functions think of her, she having made the 'grab' of the century.

I get it that it's all supposed to be a light-hearted romance - the maddeningly insistent music (would it never stop?) will keep reminding you to keep a pleasant smile playing on your lips. There are one or two darker moments - perhaps only when the central relationship is put into jeopardy - but the general air is one of comfortable armchair viewing, pleasant enough while it lasts, though afterwards forgettable in a trice.

I noticed a number of continuity blunders - just one: how does Golding manage to go to bed wearing dark blue pyjama bottoms but wakes up wearing light grey jogging pants? Careless.

Criticism is also being made in that the Singapore we see is practically all of Chinese origin, with hardly a trace of Indian, for instance, which is far from being the case in actuality.

The general casting is fine, an all-Asian-origin cast being long overdue for a Hollywood film (there are some short sequences in subtitled Chinese - Mandarin?), but I think we could do with something rather more weighty than this frothy affair. I think the film's two-hour length did not justify its lack of substance.

If director John Chu was out to create a pleasant, though unspectacular, crowd-pleaser, there's no arguing that he achieved it.
I didn't actively dislike it, despite there being moments when I may have wanted to.................5.