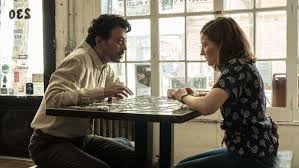 This won't be setting the world alight but I found it diverting enough.
On first hearing about it, and with that title, I thought there might be some element of setting a challenge to us, the watchers, and liking riddles and puzzles generally, I was intrigued. On discovering that the 'puzzle', specifically jigsaw puzzles, was merely a device on which to hang a tale of burgeoning romance with small-scale family drama, I still had sufficient interest to try it.

Kelly Macdonald is the mother in a practising Catholic family household in outer New York with a burly gentle giant of a husband (David Denman) and two late-teenage sons. She's always been drawn to jigsaws, occasionally becoming so absorbed in them that she neglects her domestic chores, though has become expert at completing them in record time.
In a puzzle shop, buying some new ones, she sees a notice urgently requesting a partner for puzzle-solving, and this turns out to be a recently-separated wealthy city resident (Irrfan Khan), with whom she makes appointments to meet twice a week leading up to partnering him in an upcoming jigsaw competition, she having to concoct a deceit for her family to cover for her absences. You can see where this will go. As he gradually falls for her she is reluctant to reciprocate, her family loyalties being paramount. Interesting also that on more than one occasion, despite her devotion to puzzles, she belittles the practice as being childish, which is not something her partner expects to hear from her.

It's a reasonably absorbing tale, made a little different by its unusual pretext. Kelly Macdonald captures well the dilemma faced by her character regarding where, ultimately, her allegiances are due, whilst Khan's character is totally free to make his own choices, and he is also convincing.

This is Marc Turtletaub's second major feature as director, and it's more than acceptable. Maybe not a film one would want to go out of one's way to catch but if you do happen to see it it, either on cinema screen or on TV, where it won't lose much, it should go down reasonably well...................6.