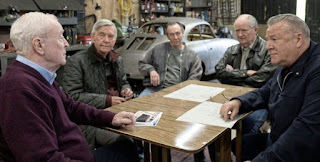 Going to see a film about which one already knows has had scant, if any, praise, does not fill one with excited anticipation.  That was what probably led to my disliking it rather less than I'd expected. Not a recommendation to see, without doubt, but also not as dire as all that.

Based on an actual heist of money and jewellery (value est. £14 mill. = 18.5 mill. $ American) as recently as 2015 in Hatton Gardens, East London and starring a roll-call of stalwart, aged (geriatric or very nearly - except for one) British stars as the burgling gang, led by Michael Caine (now 85-years old, here playing 76) and including Tom Courtenay, Jim Broadbent, Ray Winstone, Paul Whitehouse, with Michael Gambon - and Charlie Cox at a sprightly 36.
The robbery, carried out over Easter week-end (long public hols), was, unsurprisingly, very big news here at the time, being the biggest such in British history, maybe less publicised abroad. Apparently to date only £4 million of the haul has been recovered.

I quite liked the film's construction in that not much time is wasted in introducing the characters nor in showing the planning of the crime. In fact within half-an-hour of the film's start the burglary has begun - another half hour and it's over i.e. the loot is being divided, or at least agreed on how it is to be.

The film concentrates not so much on the mechanics of the audacious event but rather on the dynamics within the criminal group. It doesn't take long for the squabbling to start - in fact there's a major falling out and walking away by one character before it's even been committed. It's not hard to work out that the rivalries between gang members will lead to suspicions as to who can and can't be trusted to keep tight-lipped, as well as the sharing, especially since the there's no actual physical dividing up of the spoils until a few days have elapsed.
The script is plain, unexciting and predictable (replete with 'fucking' of this and that) - with the inevitable repeated references to age and incontinence, as well as to diabetes. Not much imagination there.
The police's relative ease in identifying the culprits was rather hard to give credence to, though it is based on what happened. I liked that there is no script at all for the officers successfully tracing the gang members, completely wordless as it was.

t was curious why, right at the film's end, we had to be shown a succession of two-second (max) clips of four of the main stars' early films - Caine  (as Harry Palmer) and Courtenay, Broadbent and Winstone. Why? We already know who they are!

Director James Marsh's most renowned film to date is 'The Theory of Everything', and this new one hardly deserves to be spoken in the same breath as that fine achievement. Nonetheless this was, in my opinion, nowhere near the unmitigated disaster which some seem to indicate it is........................5.