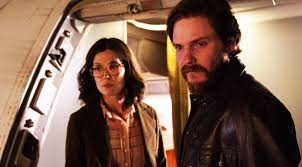 (In the U.K. the film's title is the single word name of the Ugandan town).

It's been a lean time in these parts in recent days for the discerning cineaste. To keep a foot in the door I'd been minded to see two films this week, both of which have received less than enthusiastic reviews. I ditched 'Breaking In' and opted for this one.

Those of my generation will remember the incident in 1976 which grabbed the entire world's attention for several days - the skyjacking of a French plane having just taken off from Athens, flying it to Uganda, with the terrorists threatening to kill all the passenger hostages and French crew if Israel did not release imprisoned Palestinians and sympathisers in its gaols. Israeli passengers were separated from the rest but there was the threat that all passengers would be killed if demands were not met.
Rosamund Pike and Daniel Bruhl play the leaders of this grim plot, both members of (the then West) Germany's Baader-Meinhof gang, - both of them to me seeming curiously under-powered in this film, considering the focus of the entire world being on them for so long - hardly any hysteria and very little shouting.
Even the Israeli cabinet and politicians (including the estimable Eddie Marsan as interim Prime Minister, Shimon Peres) didn't appear to be unduly over-excited despite the rest of the world being on tenterhooks.

A principal curiosity of the film is the very strange appearance of an act, semi-dance and semi-'creative' modern interpretive movement (I guess) - performed by about twenty be-suited (mostly) men to a rousing Hebrew song, on stage in front of an audience. And what's worse is that it's repeated in short snatches throughout the film (why?) - moreover, and most controversially perhaps, its repetition is juxtaposed with the climactic shoot-out at Entebbe airport. The significance of this insertion missed me totally. It must have taken some nerve to decide to risk this, and although it added a different dimension to what would could otherwise have been a routine conclusion, I have serious doubts as to whether it worked successfully.
Through the film there's only minimal on-screen violence with nothing really to look away from. I have to say, though, that despite those of us who remember the incident knowing how it finished, there were moments now and again when tension was reasonably well ratcheted up.

It's Brazilian director Jose Padilha who takes the chances, but I don't think he's created here a film which does justice to the seriousness of the world-shaking event which had consumed all the news media for a week or more. Rather better, and covering the same events, though not without faults, was the 1976 film 'Raid on Entebbe' (filmed just a few months after it actually happened) with Peter Finch (who was himself to die just a few months later) and Charles Bronson - with Yaphet Kotto as the crazy President Amin.