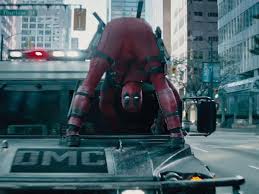 Ryan Reynolds reprises his earlier eponymous character - and more's the pity that there's little original with this further instalment of comic book extreme violence, much of it bloody - limbs and heads lopped off,  (which the context makes acceptable), too-many-to-mention stabbings, explosions, incinerations (you get the picture) - but, I think mistakenly, this time there's far too many asides to the camera of what one assumes is quickfire wit, some of which works and some doesn't, largely because much is delivered so fast that it's hard to catch the words. Fatally, I reckon, is that although I can take it for maybe half an hour, at the end of the first 60 minutes it was wearing me down, and there was yet another hour to go - and all with hardly any respite! This identical manner held up for pretty well most of the first film because at least it was original then. But to repeat all these winks and self-knowing nods to the audience is, in my opinion, milking it a might too far. It needed something fresh to carry us through a second time, and this it failed to provide.

Ryan Reynolds has as his nemesis Josh Brolin as 'Cable' a time-travelling super-powered pest with whom he has to engage in order to protect another super-powered boy (Julian Dennison) with heat-generating hands capable of throwing fiery missiles. He enlists a team of about five assistants, male and female, each of whom has individual super-human powers too. It's not necessary to know much more as it's all subservient to spectacle anyway, and on that measure alone, I suppose it works - but two hours is one hell of a stretch for a 'comic strip'.

For one-time (and continuing) stuntman and stunt-double David Leitch, this is his second full-length feature film, as director, his first being the substantially better 'Atomic Blonde' (2016) with Charlize Theron. In this film there's no doubt that he keeps things moving along - in fact there's hardly a stop when I'd been wishing for more breathers. But from fans of his style I can't think there'll be many complaints.

My 'entertainment' was further diminished by two unfortunate circumstances. First, about three rows in front of me was sitting a middle-aged couple, of which he clearly had some 'issues'. He was wearing a baseball cap but all through the film he kept taking it off and, must have been half a dozen times, holding it right up at arms length and twirling it around on one finger, obscuring the lower part of the screen, and all the while muttering, which had led me to think early on that it hadn't been malicious, he just being unaware. It affected not only me but possibly a couple of dozen others, but no one said anything, and I sure as hell wasn't going to. (Once his female company did make him take his arm down, but only that one time).
Then there was a more mature woman a few rows behind me and a little way along who found practically every action and every single line so completely side-splittingly hilarious, which she broadcast to the entire auditorium with one of those ultra-irritating, shrill laughs that simply grate on ones nerves. I was by no means the only one who repeatedly turned round and glared at her with looks-that-can-kill, but she carried on in oblivious mode. What the hell was so relentlessly funny? Blowed if I know! If the film had been more entertaining than it was and required ones concentration then it might have been more problematic. As it was, I don't think it made that much difference.