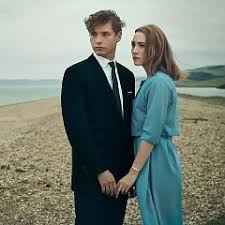 I'd been bracing myself to feel let down by this, having been mightily impressed with Ian McEwan's novella (which I've read twice) which had been shortlisted for the 2007 Booker prize. It turned out that I was not disappointed in the least, the screenplay written by the author himself and very successfully put on screen by Dominic Cooke, whose debut as feature film director this is.

The basic story is set in 1962 on the south English coast where two newly-weds, Saoirse Ronan ('Lady Bird', 'Brooklyn' ) and Billy Howle ('Dunkirk', 'The Sense of an Ending') arrive directly after their wedding to spend their honeymoon in a fairly standard hotel. Both completely inexperienced, the consummation of the relationship doesn't go as either of them would wish (to put it mildly), and subsequent recriminations abound.
In flashbacks we see their first meeting at a CND meeting in Oxford where they are both studying, their introductions to their respective parents - her upper-class, rather snooty ones (Samuel West, Emily Watson) and his brain-damaged mother (Anne Marie-Duff) and dutiful father (Adrien Scarborough).
She is a violinist in a string quartet/quintet, he more interested in rock (Chuck Berry) but is open-minded enough to extend his own horizons to embrace her repertoire.

The atmosphere of the book is well captured, considering that much of the written word was a spelling out of what was in the minds of the young couple - their initially held promise of the expectation of a loving life together, before it all comes crashing down - with consequent bitter and hurtful words from both parties.

There is a two-stage epilogue, in this film given a bit more weight than the mere six pages (out of 166 in my copy) in the book. I was starting to think that it was an error to have gone this far but I must admit it was largely redeemed by a highly emotional moment near the very end where I could feel my own tears welling up. Quite beautiful it was, and took my breath away.

It's a small-scale film but sentiment is writ large without the deep wallow, which for me would have been fatal.
Although Saoirse Ronan has shown herself to be a fine actress, her face is one which, until she acts, looks to me like a blank parchment awaiting someone to write on it before she captures the personality, which she does most ably. In contrast, Billy Howle (whose name hadn't registered with me until now, and looking at times very like a young Michael York) has a face which reveals his hand of cards straight away, a characteristic which plays itself extremely well in a film like this.