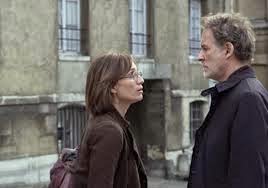 It's always nice to have one's expectations confounded in a positive way. So it was with this film, which I hadn't been aware would be a cinema version of prolific playwright Israel Horovitz's Paris-located theatre piece. Here, now in his mid-70s, he makes his belated debut as director of a feature film, and a fine finished product it is too.

My ignorance had me suppose that this would be a feeble comedy, played very broadly, perhaps with some slapstick thrown in. But it turns out to be much deeper than that.

Things started badly for me when, over the opening credits, the music features - yes, that sure-fire, Gallic cliche - an accordian! And this sound crops up quite regularly throughout the film, I suppose to remind us where we are. (Pleeeeeeeze!). But the downers are far eclipsed by the film's more worthy attributes. I was fearing that we'd see the usual touristy compulsory sights but, though we do indeed see Notre Dame several times as well as a number of scenes on the river bank, with the Ile St Louis in the background, it's not overplayed to distraction. And I'm thankful that we're spared any sight at all of you-know what!

Kevin Kline flies in from New York, having inherited a large apartment in the fashionable Marais district (an arrondisement I used to know quite well). Impecunious, he arrives with the intention of putting the flat up for sale at a tidy sum in order to get himself back on his feet, but he finds it already occupied by both Maggie Smith (French, and of 90 years or more) along with her unmarried, though involved, daughter, Kristin Scott Thomas. (We've seen the latter in so many French films of late, where she speaks only that language. Here she has the opportunity to use both her languages of fluency). It turns out that the mother has the legal right not only to remain there until death, but she can also claim rent from Kline if he decides to move in, which he has to do, having nowhere else to go. Complications and arguments develop, a lot hanging on how much longer can the Maggie Smith character survive. At this stage I thought it was going to turn into Kline trying to plot how to kill off Smith fiendishly and without suspicion, in which case it would have been a good vehicle for the likes of Danny de Vito. But it doesn't go that way at all and gets much more serious.

When Kline and K.Scott Thomas first meet one knows which way the arrow is pointing in their relationship as their first scenes are all squabbles and heated arguments. But that thought doesn't dull the edge of the denouement.

I thought all three main characters were at the top of their game. The two women we have seen doing excellent work many times in the past, but for me it was Kline who really steals the show. I don't think I've seen him in a straight dramatic part since Ang Lee's very impressive 'The Ice Storm' of 1997. In 'My Old Lady'  he runs the gamut of emotions, retaining credibility throughout. I doubt if he's been better on screen.

The screenplay betrays its theatrical origins in no bad way, one of which being that it's far superior to many a modern-day film script. It may be that the film has opened the whole thing up from being based on being a three-person stage play. I don't know, but it still works well. (Good also to see Dominique Pinon again, here as an estate agent).

My cavils relate only to the predictable one of too much music on the soundtrack, though I have heard worse - and that maybe the film, at an hour and three-quarters, stretches out the material a shade too much.
But otherwise I'm very glad to have seen it, and doubly so in that it wasn't at all the creature that I'd been expecting................7. .
Posted by Raybeard at 06:51