Film: The Hobbit - 'The Battle of the Five Armies' 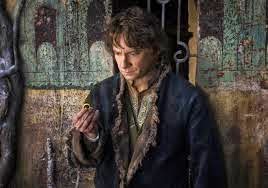 Well, thank goodness that's over! The concluding part of the over-protracted 'The Hobbit' trilogy is every bit as visually impressive as the earlier episodes and anything in the preceding 'Lord of the Rings' sequence, even though this was the only one of the aggregate six parts that I viewed in flat-screen 2D. But impressive visuals alone do not an engrossing film make and I'd become weary of this entire franchise several parts ago.

Continuing their characters' stories after 'The Desolation of Smaug' are all the names with which we've become so familiar - Freeman, McKellan, Bloom, Armitage, Blanchett etc - and Christopher Lee again making a brief, but welcome, re-appearance.
The story assumes that we'd remember what had happened before this one picks it up again. But a year ago my interest had already become so depleted that then I just let it wash over me. So for the most part in this final take I had nary a clue what was going on so once again just sat back in my seat and watched the spectacle - of which there's no shortage.

There's big-scale fighting galore, as noisy as one might expect - with elves, dwarves, wizards, dragons, flying reptiles and monsters of various types and dimensions, but it quickly all became so ho-hum for this viewer. It didn't hold my attention and I found myself consulting my watch frequently. I think one would have to be a die-hard enthusiast to enjoy these films to the full. I had actually enthused about the first of the LOTR films, 'The Fellowship of the Ring', but then it had helped having read the entire 'Ring' volumes four times by the time that first film was released. However, after that particular opening instalment I found the appeal to see the remainder decreased, so that by the time the first of 'The Hobbit' series of films arrived (I've only read that slender book twice), and knowing that it had been expanded so far as to make the original literary work almost irrelevant, I was far from keen. Still, the first 'Hobbit' film was hardly bad - just so much of a lesser event following after the mighty LOTRs.

This final episode is also the shortest, though still coming in at over 2 hours 20 minutes. For me it felt as long, or longer, than it actually was.

Director Peter Jackson has accomplished two major trilogies which will probably be considered as 'significant' in the annals of film history. I've no quarrel at all with his role in directing the six parts. They are all pretty seamless in structure - and continuity fluffs have been much rarer than I normally notice. But in the final analysis, the films just didn't do it for me as I didn't find them interesting enough. I wouldn't care to see any of 'The Hobbit' parts again ('LOTR', maybe).
As for this 'The Battle of the Armies', relating to my own enjoyment, a generous rating would be...............4/10.
Posted by Raybeard at 08:23