Film: 'Set Fire to the Stars' 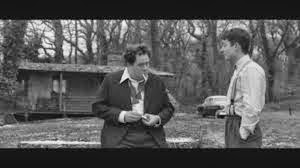 Moderately diverting story which chronicles a particular few days in the life of Dylan Thomas during a recital tour of the United States in 1950, three years before he died in New York. Unlike most contributors to IMDb site, two thirds of whom have scored this with a rating of 8 or above, I found this widescreen, monochrome film oddly inert. There's not that much difference between its conclusion and from where it began.

Elijah ('Frodo Baggins') Wood comes of age here, playing a little-known American would-be poet who is trying to steer his much-admired and famous portly friend, Dylan Thomas, (Celyn Jones) around various colleges where he's booked to give readings of his, Thomas', poetry. The dramatic focus is on the struggle to keep the alcohol-fuelled, blood-coughing, Thomas in a sufficiently grounded state to deliver his performances, Thomas' behavior veering from what one might call  'free spirited' to that of spoilt child - ever impetuous, often violent and totally nonchalant about the embarrassments he's causing, his interludes of sobriety occasionally coming within a whisker of maudlin self-pitying. The film basically concerns the Wood character's frustration at his inability to keep the rebellious poet's sometimes outrageous conduct under control.

I was struck by how often Celyn Jones' voice uncannily resembled that of Richard Burton, so near as to be almost interchangeable. He surely almost certainly modelled his delivery on that of Burton.
Just about everyone in this film seems to be a chain-smoker, though that was probably historically accurate for the time.

Directed by one Andy Goddard, whose first feature film this looks to be, and who also co-wrote it with the aforementioned Celyn Jones, I'm not sure that this film would find general appeal to those who know very little of Dylan Thomas' life or are not familiar with some of his works. If one does not have either of these as a mental reference point I fear that the whole thing may look like an episodic series of one man's unruly behaviour.
Interesting, then, but only up to a point. Yet again my personal minority view reveals itself in a score of.............5.5.