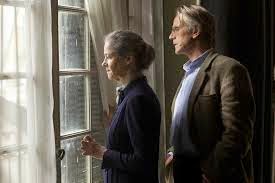 Moderately interesting, though ultimately formulaic, story of a Swiss professor (Jeremy Irons) on a mission to discover details of the life of a deceased young Portuguese doctor, who was also a luminary in the resistance against the Salazar dictatorship.
The film boasts an additional stellar mini-cast of mainly British 'mature' or advanced age actors - Charlotte Rampling, Tom Courtenay , Christopher Lee - plus Bruno Ganz and, as the young resistance fighter, John Huston (nephew of Anjelica and Danny - and not at all bad-looking).

The film makes some big demands on the credence capacity of the audience from the very start. Irons, a Swiss teacher (whom I'd have assumed had been English were it not for his name) is on his way to school in Bern when he espies a young woman about to jump off a bridge. He forcibly pulls the distraught person away and, unable to get information from her, takes her to his class temporarily, where he's teaching about Ancient Rome. She slips out without a word, leaving her coat. Not knowing her whereabouts he examines the coat, which contains in a pocket a book of the collected writings of the aforementioned resistance fighter - in Portuguese. But, not to worry, he is not only familiar with the book (so one would have thought that it's fairly well-known, but it is, in fact, obscure) and, wouldn't you know it, he can also read Portuguese! - at least enough to translate it with ease. Then falling out of the book is a train ticket from Bern to Lisbon, the train due to leave in a few minutes time. So, (no slouch he!), he drops everything without a word, leaving his school class and superior in limbo, and he hops luggage-less onto that train - exactly in the way anyone else would!
Reading the book on the journey he becomes absorbed with the mysterious writer and, on arriving in Lisbon for an impetuously-decided and open-ended stay, he starts seeking out the author's surviving relations and acquaintances to find out about his story. Meanwhile, the rescued young woman has dropped from his concerns. (She does pop up again towards the end.)
His meetings with all these sundry people are the cue for multiple extended flashbacks, using younger acting 'doubles' as they relate events.

It's curious that the Irons character, familiar with Portuguese, never once attempts to speak in that vernacular - and doubly curious that everyone he meets, even in casual encounters, immediately responds in accented English. (A cyclist he accidentally knocks off his bike calls him an "idiot". Perhaps that is the first word a native of that country would come out with, for all I know!). I accept the viability of cinematic conceit, as we do in, for example, war films where all sides speak in English. But here so many speak it with various continental accents while the supposedly Swiss Irons converses in faultlessly-sounding Queen's English.

It will come as little surprise to learn that the weight of the dramatic action (with romantic dimension) takes place in the past-narrated episodes of resistance-struggle arguments and fighting , including at least one gruesomely violent scene.

I was hoping the film would show us more views of the Lisbon which has been so infrequently captured in feature films up to now. From the brief views we have of it it does look spectacular and photogenic, but the opportunity is mostly thrown away. I think there were four short scenes all on the ferry crossing the Tagus estuary. I wish we'd have seen a lot more of the inner city itself.

Danish director Bille August (who directed 'Les Miserables' - no not that one, but the 1998 Liam Neeson, straight dramatic version) deals with the material fairly enough. I have to say that he did pull out some of the best from his very professional cast (both present day and those depicting decades previous) which gave the whole project a higher estimation than it otherwise might have had.

I might also mention that whenever I see Jeremy Irons in anything there's always something that gets in the way for me, viz his vocal support for blood sports and, in particular, for fox hunting. I find the same thing for the precise same reason whenever I hear a song by Bryan Ferry  as well as (with rather greater regret than with these two) reading some of the marvellous writings of the late John Mortimer. It's like a pebble in the shoe which can never be removed. But knowing that people have opinions which diverge from ones own is just one of the facets of life one has to put up with.