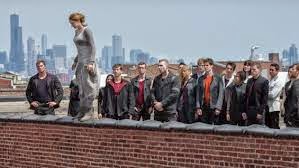 Quite honestly, I've long since had more than my fill of films set in a future where society is organised according to rules purportedly survival-necessary for the human race and its progress. (See - I didn't even use the word 'dystopian'!). My heart sank within minutes on discovering that here (set in a crumbling Chicago) humanity is divided into five 'factions' based on positive human attributes. One cannot help but recall Huxley's 'Brave New World' where a five-fold division of individuals is also enforced, though in that piece of literature it is in vertical ranking order of assumed 'worth', whereas here the divisions are, officially at least, horizontal and equal, the factions being intended to compliment each other, co-existing with mutual accommodation.

I went to see the film because I understand that the book by Veronica Roth is of some significance in contemporary fiction, though I haven't read it.
Something in the film's favour is that among director Neil Burger's credits is his accomplishment of the rewarding 'Limitless' (2011) as well as the reasonable 'The Illusionist' of five years prior to that.

A Shailene Woodley (new name to me) plays the lead, the 'Divergent' of the title, who discovers in the initial categorising of recruits (much less fun than Hogwart's 'Sorting Hat') that she doesn't fall naturally into any of the categories, though after the initial procedure they are allowed to choose their group themselves, disregarding their test results if they wish. However, once a decision is made it is irreversible. She chooses the 'Dauntless' group, in charge of law enforcement with a training programme full of derring-do tasks. However, anyone known to be 'divergent' in any faction is regarded as a threat to order and society and must be eliminated. So, wise girl, she keeps her self-discovery to herself. She has to prove to others in her group that she has cojones. Anyone who doesn't come up to scratch in training and the obstacle-course of tests and trials is dismissed from the group, cast out with uncertain and unpleasant fate. So does she pass muster and  give 'em hell? By golly she does!

There's familial loyalties to consider (both her parents and a brother), and within her group, female friendship and a smattering of (inconsummated) romance.


Kate Winslet makes occasional briefish appearances as some kind of high-ranking supervisor/manageress, steely ice-queen at times but also with a caring heart, at least as long as it doesn't interfere with her duties. She's very strict about rooting out 'divergents' but doesn't suss out that she spends a lot of her limited time on screen talking to one.

In spite of what I've just said I didn't find this rather over-long film completely devoid of entertainment value. It was a bit better than I expected, though ultimately a shallow experience which I'll be forgetting in a trice. I don't know if it does justice to the source book. If it does it doesn't exactly make me want to read it - and I shan't be first in the queue to see any film sequels....................................5/10.