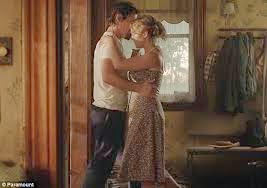 A film that'll linger in my memory - just like the smell of one of my window-visitor Tortie's stinky-poos deposited in the litter tray after I've scooped it up and flushed it away.

This film was actually released here a few weeks ago but I'd forgotten about the risibly absurd premise that the story is based on. If I'd recalled what had been said I'd probably have thought twice, but I caught it today on a screening obviously intended to mop up mugs like me who hadn't  seen it up to now. And - oh dear!

Kate Winslet, divorced mother of a 12(?)-year-old son, on a routine shopping trip is approached by escaped convict Josh Brolin in a store. (Cue a bit of 'regulation' shop-lifting!) He, bleeding a bit and with leg injured by his escape jump out of a window, implies threat to her accompanying son if she doesn't drive him away (to her house!) in order to rest his leg "just for a few hours". To be fair, she puts on all the concern, apprehension and fear which the script calls for, especially when he discloses that he's on the run from a sentence for murder. All this happens in the first ten minutes.
Well, I was going to say "to cut a long story short" but you don't really have to wait that long before he's moved in, helping around the house, mending the car, giving the son baseball tips - even ironing, for goodness sake! But all that's as nothing compared with his showing both mother and son how to make........a peach pie! So is that the apex of his talents? Not by a long chalk! Before you can say "Bossa Nova!", gammy leg notwithstanding ('scuse the pun), he's teaching her how to dance! You'll have gathered that by now the scales have long since fallen from her eyes and she sees him for the fine and caring specimen of manhood that he is. One assumes that by now or very soon they are bonking with gay abandon. (True love sure works in mysterious ways!) Thankfully we are spared the sight of any such bed scene, which would surely have been accompanied by sultry, sexy, saxophone sounds, though I'd bet such a scene finished up on the cutting room floor - where nearly all the rest of this shameless farrago deserved to be. While they're watching TV there's a flash warning about her 'guest', telling all to be alert to this convict who's escaped from an 18-year murder sentence. But is she deterred while she lovingly rests her head on his shoulder. Not a bit of it! (What's the odd murder between friends?) How about another dance?
Of course his presence in the house has to be kept scrupulously under wraps, with police on the streets and his mug-shot nailed to trees - while all the while the son is, understandably, far from happy at the developing relationship.

I must, however, give due positive regard to a few minutes towards the end of the film where director Ivan Reitman (the good 'Juno' + 'Thank You For Smoking' among his worthier credits) really cranks up the suspense most effectively. Unfortunately, this is soon dissipated in an extended epilogue over several scenes, long outstaying its welcome. I wanted to scream "Yes, we get it. Now let it GO!!!"

It would have been nice to say that one could just forget the ludicrous notion that the Winslet character would so easily fall for a sinister, convicted murderer to the extent of 'shielding' him from due justice, and just get on with enjoying the rest of the film. But there's no getting away from it. Their situation looms large in every single scene so you're not allowed to forget it.