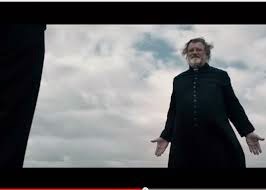 After a hiatus of over two weeks I've resumed my cinema-going, hoping that what I was going to see today would be a film of 'quality' to give me the incentive to carry on. It was.

John Michael McDonagh, who gave us the greatly enjoyable 'In Bruges'  (2008), not only directs this modest-budget, cracker of a film but employs one of the principal three actors of that film, Brendan Gleeson, this time playing an ageing, world-weary parish priest with feet of clay, in a village on the north-west coast of Ireland.

The film starts with what must surely be one of the most 'sit-up-and-listen' lines ever heard on film. We see Gleeson thinking to take confession from a disembodied male voice on the other side of the grille, only for the latter immediately to reveal that between the ages of seven and twelve he'd been sexually abused by a now-deceased priest - and that, whether or not Gleeson's priest was ever guilty of similar offences, he was going to take vengeance by killing him at a certain time several days hence at a certain place. All this happens in the first two minutes or so in which we see only Gleeson's face making perplexed and futile interjections, though maintaining self-control. It's an opening that really grabs by the throat - and hardly lets go.

Throughout the film we don't know if the priest knows for sure who is his threatened murderer, or even if he suspects who it could be. He confides what happened only to his companion parish priest who, because the sacrament of Penance hadn't actually been administered, opens up the possibility of pursuing the matter with the local police. But exactly whom the threat came from isn't the nub of the film. Gleeson's priest goes about his routine while screen captions remind us, day by day, that 'zero-hour' is approaching. In his daily minstrations he meets up with other locals, many of whom, despite having taken Holy Communion from him at the start, treat him with everything from disregard to contempt. The full horror of widespread child abuse in the Catholic Church is by now well known and, as representing that institution, he is being targeted, full face on, with the locals' hatred. He only has one genuine friend in the village, an elderly writer, and only two beings for whom he has true affection - his adult daughter (he was widowed before taking Holy Orders) and his dog.
There are a good eight or nine other motley characters (such a variety in one small village!) any one of which could be his potential murderer but, as I say, this is not the engine that drives the film along. However, when it came to the big 'reveal' in the last minutes, if I'd been asked to guess the identity of the intended killer I would have been wrong!

The script is superior in all respects. Hardly a word is wasted - though my personal quibble is that some of the Irish accents have such strong brogue that I wasn't always able to follow what was being said, particularly near the start, though that became less of a problem with time. Maybe it's a case of getting 'tuned in' to it.

And I also, regretfully, have to mention one additional thing. On one of the radio reviews I heard, someone mentioned that the priest loses "someone....er, something that he loved."  He'd let the cat out of the bag about the fate of what was most likely to be a pet - and so it turned out to be (though not a cat). It happens as late as three-quarters through the film so for the first hour I'd been steeling myself for the moment, ready to look away from the screen. In the event it lasted for no more than a few seconds. But even so I wish it hadn't been there. (Why do they keep on doing this?)

Brendan Gleeson is amazing in the film's pivotal role and should, by rights, be seriously considered for an Oscar, though I'd imagine that the film's probable limited outlets for screenings would make it rather unlikely. But he does bring out the priest's inner turmoil, doubts and irascibility to perfection. It's both a mental and physical performance, one of the very best I've seen in a long time, completely convincing. It's vastly to the film's credit that, despite the paedophilia angle as well as the priest's own foibles, from the start it has the audience's sympathy on his side. Remarkable.
The wild, rugged and breathtaking landscape and Atlantic coast of that part of the island is also something rarely seen on the screen.