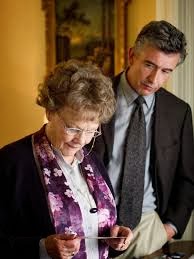 Director Stephen Frears can usually be relied upon to come up with a film that is both significant and superior. He's already been responsible for so many of them over the last three decades or more - and here, with the flawless contributions of the acting masterclass that is Judi Dench, and the increasingly and impressively versatile Steve Coogan, he's given us a film that is right up there with the very best of them. This is an exceptionally fine film!

It is based on the true story of an Irish woman, Philomena Lee, as recorded by Martin Sixsmith, his being a household name in the 1980s and 90s for us news-junkies as, among other things he was, for a time, chief BBC correspondent in Moscow and in Washington - before joining Tony Blair's government as adviser, only to later fall out with them.

This film concerns Philomena's (Dench) 50-year search for the child she had to give up (actually sold!) for adoption, by the nuns of the institution she attended (one of the notorious 'Magdelene Laundries' for orphaned and disowned girls run in Ireland by the 'Sisters of Mercy'), because it was born illegitimate to her  when she had barely entered her teenage years. Coogan, as Sixsmith, is the writer who, initially reluctant to take up the story, becomes driven by a curiosity followed by a steely determination to assist, then taking her to America where the track leads.

I was aware of the vague outline of the story but I was totally unprepared for a certain most interesting  dimension to develop, which I shan't disclose here.

The film contains a strong indictment of the Catholic Church's attitude of the time (and still continuing in places) regarding the 'heinousness' of extra-marital sex. Any consequent birth, attended by the nuns, has all anaesthetics and pain relief withheld, in order that the young mother experiences the excruciating pain brought about by her grievous 'sin'.
The Sixsmith character is a former Catholic, now atheist (rather like me, in that respect) who articulates condemnations of the Church on this issue with words which, I'm sure, a lot of us would wish to have delivered ourselves. In fact in the climactic final confrontation I was half-inclined to cheer him on. Philomena, meanwhile, retains her faith despite the lifetime of hurt that the Church has done to her.

Coogan is also one of the script's two co-writers - and it's a magnificent one, concentrated significance with hardly an extraneous word. Most satisfying to listen to.

It's incredible to think that Dench is only one month away from turning 79. Whenever she decides to retire, which surely can't be far away now, she'll have left us a body of work which any other respectable actor would die for. If she has been somewhat over-frequent on screen in recent years I don't mind that in the least. My attitude is to treasure her while we've got her. Besides, she never delivers a dud. (If you haven't yet seen her in 'Notes on a Scandal'  [2006], I'd urge all serious cineastes to catch it. It's a performance that left me transfixed with admiration.)

'Philomena' is a wonderful film. Sentimental, yes, but it's not a contrived sentiment created to get the audience's sympathy. That's already there under the cruelty to which she was subjected.