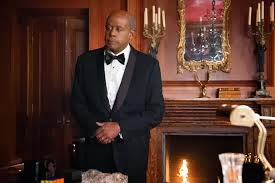 No one can deny the laudable intentions of Lee Daniels' true story version of this chronicle of the working life of a White House servant - set against the backdrop of the American Civil Rights movement, from its burgeoning in the 1950s, to becoming a force to be reckoned with and to be ignored at a President's peril, in this case a sweep of Presidents from Eisenhower right through to Regan (but skipping Ford and Carter). However, despite it undoubtedly having its heart in the right place I found the whole enterprise bordered on the ponderous. (My patience was further tested by seeing it on a cold, rainy morning in an unheated cinema!)

Forest Whitaker plays the eponymous manservant, Cecil Gaines, his gradually ageing features from young adult to retiree, through make-up and prosthetics not being as successful as it ought to have been, sometimes looking old before his time then in a following scene appearing to be facially rejuvenated. The same applies to Oprah Winfrey's features as his rather domineering, ciggie-puffing wife. However, in this film it is she who is always the more formidable on-screen presence, and for me carries the acting honours, moreso than Whitaker, who in his working persona is trained to withhold from showing his true feelings, and only in domestic settings, such as when he is arguing with his two sons, is he allowed to give his emotions full rein. But even at such times he appears relatively subdued while it's still Winfrey who time and again steals the show.
British hottie David Oyelowo (who, I've just seen, was born in Oxford a few months after I moved there myself) plays Gaine's headstrong, militant son, Louis, and is one of those actors who effortlessly draws one's attention to whereever he is on the screen. I recall him playing a 'colour-blind' title role in the Henry VI plays with the Royal Shakespeare Company. He deserves to become a much bigger name, and no doubt he will.

A succession of well-known stars play the Presidents (as well as at least three of the briefly-seen female characters) though it's Alan Rickman's Reagan who is the only one to achieve a close facial resemblance. However, that's not really material as each President is a cipher for the developing (or regressing) civil rights politics of the time.
I did find a number of scenes to be near heart-breaking. For those of my generation it was poignant to see again news footage, now tempered by hindsight knowledge of what such struggles eventually were to achieve - not to mention how far they have still to go, in attitudes if nothing else.

I'd have liked to have enjoyed this film more but I don't think it's as remarkable as it strives to be, though the personal story in itself certainly is noteworthy. A score which I think would fairly reflect the sum of its impact on me is................6.
Posted by Raybeard at 07:40