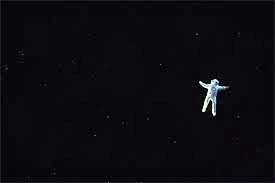 If this film were to be judged on visual effects alone it would score as near a 'Perfect 10' as dammit. To call that aspect merely "impressive" would be to do it an injustice.

George Clooney and Sandra Bullock are two astronauts carrying out extra-craft repairs when disaster strikes. From that point onwards the story is simple and ruler-straight linear (which is no bad thing), with the entire focus on how they can survive.

The qualification which made my enjoyment slightly less than some people's is very personal, viz: in any attempt to depict a level of reality in space-located, science fiction films my observations have a tendency to become over-critical. I wish I could just sit back and enjoy the film as an exciting piece of fiction but I do find it difficult to let my cavils go. I won't spell out those occasions (very few in this film, I must admit) when my credulity was over-stretched but it contributed to a sense of detachment, alien to many of the reviews I've read which called it "very absorbing" or similar.

Little else to say, other than that I'm glad I saw it in 3D - and this is probably the most successful use of that format in any film I've seen to date.

In terms of my own personal reaction, and fully aware that some others will certainly consider my opinion as sullenly over-harsh, I would certainly still recommend 'Gravity', with a rating of.............7.
Posted by Raybeard at 07:33