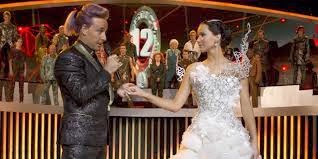 Sequel to last year's 'Hunger Games', there is little that is new about this one, directed by Francis Lawrence. It's one of those films which makes me feel evermore alienated from a mainstream cinema audience. A glitzy and vulgar public ceremony (which I can readily accept) leads up to a test of survival skills for a number of previously victorious competitors fighting it out to the death, both amongst themselves as well as against a manufactured hostile environment -  for the ostensible purpose of crowd-pleasing 'entertainment', though with the more sinister underlying motive of control of the masses.

With sentimental episodes, complete with music pointing to the emotion one ought to feel, it mirrors the first film in that the first half is all about the build-up to the 'Games', sketching out, very roughly, the characters - participants and organisers - with concentration unsurprisingly on the Jennifer Lawrence character, which she plays brilliantly, by the way - and the ensuing hour or more, which is the 'Games' itself. And 'games' is the operative word as time and again I was thinking that the whole concept reminded me of a computer game where lives are disposable and one tries to win at all costs (within pre-ordained rules, of course). Well, one's own life is at stake, after all.

I found it a film brutal to the point of nastiness, but that is precisely what the game is intended to portray.
Good to see Donald Sutherland again, and Stanley Tucci too, as M.C. (even more outrageous than before), Woody Harrelson - and Philip Seymour Hoffman, who is a formidable presence in whatever film he appears.

Can't believe that I gave the first film a rating of 7.5. I did think higher of it than this one, though part of that will have been due to the novelty of the concept. Witnessing exactly the same formula all over again was borderline boring. Can't see myself mustering much enthusiasm for the next in the series, though I probably will go. Or will I?