Film: 'THE WAY WAY BACK' 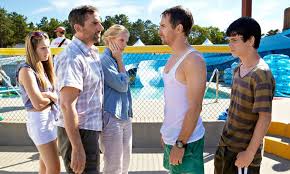 I had little enthusiam for seeing this, knowing, as I did, that it dealt with that off-putting subject of teenage angst, yet again. Within five minutes I thought that it may not be quite the feared ordeal - and so that turned out to be the case, the situation rescued largely by the presences of Toni Collette and Steve Carell as mother and effectual step-father of the sullen, withdrawn, pubescent son at the core of the tale.

The family (also including Carell's stuck-up teenage daughter to complete the quartet) drives out to their holiday home, where there's an outrageously loopy next-door neighbour with her own adolescent daughter. (Allison Janney as the mother is one of the features that made the film worth watching. I wish there'd been more scenes involving her.)
Close to the home is an amusement park with water features, to which the boy is drawn. He there encounters wise-cracking employee, Sam Rockwell, all mouth and baggy shorts, unable to complete a sentence without some sassy quip or ready bon mot. Rockwell takes him under his wing, prods the surly teenager out of his shell, getting him to go after a particular girl to whom he's taken an especial fancy (attaboy!) and enlists him onto the centre's workforce, all unbeknown to the boy's parents. Meanwhile Carell's wandering attentions, observed by his step-son, imperils the parents' relationship. When the boy opens up to Rockwell about his concerns, the latter drops his exasperatingly jokey facade and turns out to be (wouldn't you know it?) a genuinely sympathetic and comforting guy, providing exactly the supportive shoulder needed to cry on.
(In a small role, co-director and co-writer Jim Rash plays a wimpy, eyes-turned-upwards, rather effete booth worker - one who didn't have a mom but "had two dads".)

Both Toni Collette and Steve Carell starred in 'Little Miss Sunshine' (2006), of course, and there is a superficial resemblance to that film here, mainly in the angle of the humour, but also in showing a family of varied odd-ball strained relationships. I thought 'Sunshine' was the more entertaining of the two films, though not by a great deal.

If one doesn't share my aversion to schmaltz, which comes to the fore in the latter part of this film, you will probably enjoy this more than I did. With a different cast of lower quality it could have become an insufferably painful experience, but it didn't descend down to that level.
With no substantial regrets, then, I confer on it a score of......................5.5.
Posted by Raybeard at 00:26