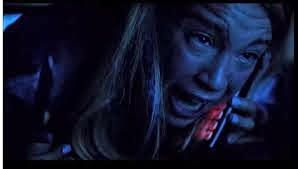 The first hour of this 94 minute film is terrific - as tautly suspenseful as a thriller ought to be. After the first few minutes the tension starts and hardly lets up. Pity, then, that the final section veers off into grisly Grand Guignol territory, though still with enough 'oomph' for me as not entirely to capsize the whole venture.

Halle Berry (in a 'good' film for a change), plays one of the operators in an emergency call centre. She is knocked mentally sideways by having to live with her failure, (though not her fault), to be able to save a teenage girl from being the victim of a murderous burglar. Despite trying to live with this burden she decides to get back to work only to get a call from another girl of similar age locked inside the boot of a driven car, in the process of being abducted. The chase is then on to identify the kidnapper and/or the car, and to frustrate his unknown intentions, whatever they are. The action is well executed, directed and acted. Edge-of-the-seat stuff.

The final play-out reveals the motivations of the perpetrator for the abduction in a scenario that would have given Norman Bates himself a decent run for his money. And I didn't see the ultimate pay-off coming.

Overall, a superior film. If it had maintained the momentum it achieves for more than the first half I might have been tempted to mark it a notch higher even than the score I've settled on...........7.5.
Posted by Raybeard at 08:18