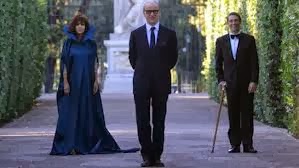 All the reviews of this Italian film which I've seen make reference to Fellini, and though that esteemed director's style is written all over this one it's a very high bar to reach in terms of quality, and for that reason I was constantly wanting it to be more enjoyable than I actually found it.

Sorrentino's film concerns an old writer, partly reminiscing on his past as well as experiencing varied aspects of present-day Rome, while he puts on a show of, despite his age, still being 'with it' as regards younger generations (attending parties, dancing etc).
This film is every bit as discursive as Fellini, yet somehow managing to lack the cohesion which that master achieved with such ease, despite it having the one strong central focus in the writer.
It's episodic throughout, with some bizarre characters, including at the end (the most successful part for me) a gently amusing depiction of some clergy of the Catholic Church and, in particular, a 104-year old nun (whom people refer to as 'The Saint') and who is a general object of reverence despite her being, understandably, in an advanced stage of almost totally silent and unreactive senility. Religion and its quirks was an area Fellini was especially good at evoking with his peculiarly angular viewpoint. (What he would have made of the scandals of recent years one can only surmise.)
Comparisons have been made with 'La Dolce Vita' (it's easy to name the 'winner' between them) but there is also a strong whiff of another of my 50 all-time favourite films, 'Roma', in which the episodes also traverse the title city, depicting various characters, some of them distinctly oddball. But that was a masterpiece, a description it would be hard-pressed to bestow on this film, notwithstanding a few of the pleasures it does afford........6/10.
Posted by Raybeard at 08:46