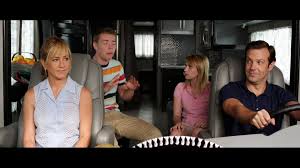 I probably wouldn't have bothered with this had I not noticed on the IMDb site that it had accumulated quite a high average vote. To be fair, I did get quite a few chuckles from this rather over-stretched film, just about all of them coming in the first two-thirds - as well as exclusively arising from some rather sharp one-liners rather than the situation in hand.

I only knew the one name from the cast though Jason Sudeikis did look slightly familiar. Referring to his filmography I see that I last saw him in the rather more entertaining 'Horrible Bosses' of 2011.
﻿
He plays a drug dealer, said 'recreational drug' being, arguably, the least controversial one, marijuana. He's fallen into debt with his spivvy supplier to the tune of thousands of dollars, and in order to have the debt expunged he's given the 'choice' of collecting just a "smidgeon and a half" of grass from Mexico and smuggling it over the border, and be paid for his 'trouble' - or be killed. He gets the idea, to give the appearance of credibility, of creating a 'family' by coercing his squabbling neighbour as his wife (Jennifer Aniston stretching all belief as a professional stripper) a nearby nerdy kid and a female juvenile thief as his children. So they all go off together, expecting to get a share of the fee on successful return. When they reach their destination the quantity of grass turns out to be enough to load a lorry - so it's just as well that he'd had the idea of taking his 'family' in a virtual home-on-wheels. On the way they fall in with an odd couple and their daughter whose attitudes swing between 'free-love' and law-abiding censoriousness.

The film did have its moments and I did laugh out loud at a couple of points. But when one sees at the start a couple arguing like hell, one already knows how they are going to end up - and that is precisely what happens in a bit of a treacly finish, though I have seen worse.
There's a few blooper out-takes at the end, actually this time placed before the final credits, so you're less likely to walk out and miss them, though they are hardly anything special. When I say that the final one is a prank involving the car radio and refers to one of the cast's TV past you can guess where it goes.