Got back yesterday from my annual few days away to visit my sister and her hubby, with whom I stayed - plus a visit to my elder surviving bro and his wifey. Also took in funeral (by fortuitous timing) of my late friend who was my mental sparring partner and stimulus of the last 52 years.
Funeral was okay as funerals go. Refreshingly, a humanist one, with the crematorium chapel cross having been removed. About 80 people there, but I'd only known his brother (younger by 3 years) - and his wife whom I'd only met twice before, the last time being 35 years ago. Shocked by how much she'd visibly aged. She was quite a beauty when I'd briefly known her, but now she has completely grey hair and is already walking with a pronounced stoop, although she's several years younger than I am. Sad.
Not knowing anyone outside family I sat alone on bench at back but was pleasantly surprised to hear my name being one of only two mentioned in the address other than immediate family. (Apart from Mary and his brother no one else would have known who I was). Paul leaves two sons, 25 and 30, whom I'd never seen before. Both as yet unmarried but he confided to me that he thinks the younger one, who's not at all bad-looking (with goatee-type beard), might be gay.
'Ceremony' began with my choice of the playing of the Dietrich Fischer-Dieskau recording of the 'Et in Spiritum Sanctum' from the Bach B minor Mass, which I knew Paul particularly loved - as I do.

Guests were invited to convene at a certain pub afterwards for a 'wake celebration' but, having a phobia for such social functions - even worse when I don't know anybody else - I made my excuses and left.
Anyway, so that's over and done with.

My sister and her large family (sons and daughter, all of whom are grandparents themselves) have a number of important issues in their lives at the moment, as I have, (when aren't there any?) so it's hardly been a relaxing time.
I wanted to be left alone with my thoughts for a while. So the day after the funeral I took a train some 40 miles away to an area of the North Yorkshire moors where we used to holiday for three consecutive years when I was a boy of around 9 to 11. In that steam-train-age of yesteryear, going a distance which these days would be considered no further than one's own doorstep was an enormous adventure. Here are some pics, including self looking very serious and almost alarmed - and the farmhouse we used to stay at. The hills around it were where I and my two younger brothers would play and whoop, running up and down hills with no trouble at all. Now I can barely walk up those same slopes, needing to halt every few steps to recover some puff. 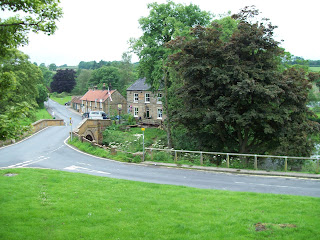 The deluge of rain we've been having since Spring hasn't left this part of the country unaffected either. Walking off road was an unpleasantly squelchy business. However, it all looks lush and green - very photogenically picturesque. 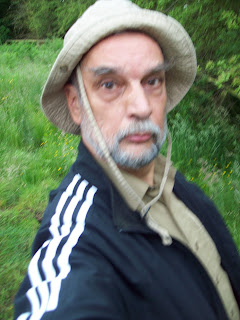 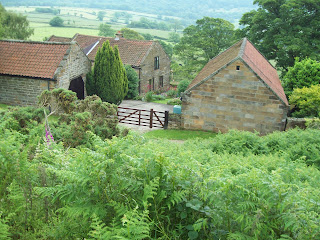 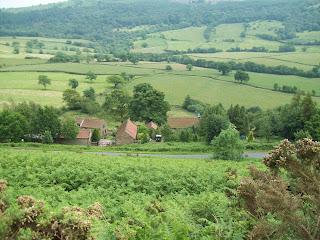 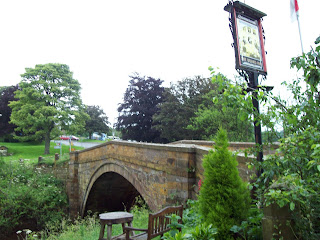