(No, not the Oprah Winfrey 1998 film of the Toni Morrison novel.) 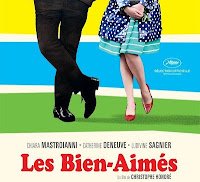 Once in a while I'll leave the cinema before a film has ended because I just can't take any more. With 'Beloved' it's the first time I've done it in well over a year.
As you see on the left, it's a French film, similar to the 1964 'Les Parapluies de Cherbourg' in having songs (not too many), performed/mimed by the actors, punctuating the dialogue. The wonderful Catherine Deneuve actually plays a lead role in both films, but this later feature has absolutely nothing of the whimsical charm the earlier film had, which made it such a pleasant, if slightly shallow, experience.

Lest it be thought that my overall opinion was clouded by what happens well into the film (around 50 minutes, in fact), I was starting to get irritated within the first 10 minutes. The self-obsession of the leading female character was already riling me. After another 10 mins I was beginning to wonder whether it would really improve. By the time half an hour was up the thought had drifted across my mind whether I should walk out. (According to an arbitrary self-ordained rule I set myself way back in the 1960s, I cannot include a film in my 'register' as having been seen unless I'm present for at least 2/3 of it)  So, notwithstanding the fact of wanting to leave there and then, I'd been confined  by my own strictures to endure at least another hour and a quarter of it if it was to be entered as a filmic experience.

It didn't start well when the said leading female character, working in a shoe shop, steals a pair of shoes for herself. Okay, it's such a film cliche to have a shop-lifter stealing and, naturally, getting away with it (Ha ha! - what a lark!). It's as much a hackneyed situation as it is to have a peal of thunder followed within seconds by rain coming down in torrents (Btw: when was the last film in which it rained moderately - or, even rarer, if ever, it just drizzled?). But I can accept the shoe-stealing start as being merely formulaic, even though it always irritates me intensely.
I'll jump the next tedious 3/4 hour until the young female goes to a live music club and finds herself attracted to the performing group's drummer, a Canadian. Their eyes meet and a spark is struck. They encounter each other again outside. He invites her back to his place for a drink where she starts making advances to him. He (with some regret?) explains that he is gay. She, profusely apologising for not realising it, hurriedly leaves - though, he tries to follow, unsuccessfully. (However, you see, his passion has now been fired!) He seeks her out the next day and - before you can say "ex-gay", he's dragged her into a male toilet and is passionately and, very 'cunningly', pleasuring her with his tongue. (So, if only he'd met the 'right' woman before, he might have been 'cured'!  But why did he say he was gay if he'd actually been bi-sexual, when he could have got straight on to to screwing her? Or was it her overwhelmingly attractive presence which brought on this self-revelation that he was sexually attracted to women after all?)
After this blistering encounter, they go their own ways - she, having several one-night stands with a number of different men - he, presumably, returning to his boyfriend. But then they meet up again. By now my 'allotted time' to remain watching the film was coming to an end. I left the cinema just as these two were renewing their yearned-for re-acquaintance (they both being unable to forget the other, of course!) - but he warns her that he doesn't think he can supply what she wants as he suspects that he might have AIDS after having experienced a wild time in New York, though he hadn't actually been for a test. (Why say "AIDS"? Why not "HIV"? But, as I didn't catch the precise French words, one can at least blame the subtitles.) But, oh, if only he'd found her earlier - then he might not have been infected! And that was when I left the cinema.
Must admit I did wonder how the film would end. Would he find that his suspicions about carrying the virus were misplaced and that the two of them could live together - Hap.Ev.Aft.? Or would it twist around and reveal that while he turned out to be clear, she was the one with HIV after all those turns with strangers?  I've looked up the synopsis on the web and found that the ending was neither of those - and quite surprising, at least as far as she was concerned. But I'm now past caring.

Oh, and on a general point, why is it that in nearly every single French film all the adult characters smoke like chimneys? Far more than in American and British films, where, I think, smoking is already shown with greater frequency than one encounters in real life anyway.

I would normally have included my thoughts on 'Beloved' in my upcoming blog on films seen during May which I'll do in a couple of weeks.  But I had a relatively lot to say on this one, and anyway, it gets it off my chest by devoting an entire blog to it now.

My irritations with this film are very personal - and some who have seen it may take issue with what I've said. On IMDb site a guy who uses 'gay' as part of his blog-name thought that the film was pretty good, so it's an individual reaction.
But leaving aside the gay element (which was only one strand of the film in any case) I was felt so antagonised  from the very outset that it becomes a self-vindication in knowing that it will certainly contend to be my own 'Clunker of 2012'.