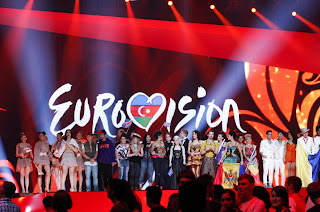 Last night was the first semi-final in what is the biggest of all international camp-fests - though also probably the only one!
Eurovision Song Contest 2012 got off to a flying start with some gloriously O.T.T. acts - and a high proportion of the songs were pretty good too, a welcome change from recent years.
Twenty countries participated and ten were chosen by viewer votes to go onto Saturday's final. Semi-final Part Two will take place tomorrow night.
The U.K., along with France, Germany, Italy and Spain, are automatic qualifiers for the final in recognition of their being the main financial contributors to the event. The U.K. entry will be the bravely and imaginatively chosen, 76-year-old crooner, Engelbert Humperdinck, who had several monster hits in the late 1960s, and 'notorious' at having been the first artiste to have kept the all-conquering Beatles from off the British Number 1 in 1967 (with 'Release Me' blocking 'Penny Lane/Strawberry Fields Forever'. I remember it well.) His ballad this year is, to my mind, not bad at all and certainly in with a fair chance.
My major disappointment last night was that the country I would have voted for, Israel, did not make it into the final ten. I find it hard to think why - they had, probably, the campest of all acts  (and that really is saying something!) with a conspicuously hottie (for me) backing singer, not to mention the hairy, yummy drummer, and with their lead singer sporting a single outsize ear-ring, more of a chain-link pendant - and all with a  darned catchy, jolly song that could have come straight out of a 1950s Hit Parade - and I loved it! Shame on you, Eurovision viewers, for not recognising 'quality camp'!
However, at least two of my other choices, Moldova and Latvia did get through, as well as, very pleasingly, from Russia the group of peasant 'grannies', as they are described, though I would have thought 'great-grannies' would have been nearer the mark. Good, folksy, up-beat song though.

All this takes place in Baku, Azerbaijan, under the politically-ghastly regime of President Aliyev, that country having earned its host status after winning the contest last year. The president and his family-loyal coterie of stupendously oil-rich hacks are squeezing the event for all its propaganda worth. It remains to be seen if any of the expected demonstrations against his cast-iron grip on power and his appalling crushing of all dissent will be manifested at any time in the next few days. His totalitarian style would have made Stalin himself green with envy. Aliyev's glamorous wife, who could give Carla Bruni a run for her money - though she, Mrs Aliyev,  would have lost - is herself in charge of television coverage. Last year, Azerbaijan, at enmity with neighbouring Armenia , not only pettily blacked out its TV screens when the latter country's entry was performing, but the police after investigation of the state's telephone records, hauled in for questioning, with physical force, anyone who had voted for Armenia as a form of protest.
Aliyev's family, including his three teenage children, are living in such unimaginable luxury beyond the comprehension of the huge majority of Azerbaijani's fantasies, to which our own British Royal Family can hardly hold a candle. 'Filthy rich' doesn't even begin to describe it. At least we can say what we like about our Elizabeth and her dysfunctional family circle - and, indeed, we do!

So all that leaves a sour undertaste. So many of the winners in recent years have been from politically repressive regimes that it'll be a pleasant change to have it held next year in a location we have less concern about. Though having said that, I'm still very disappointed that we won't be seeing the Israeli act again on Saturday night.
Posted by Raybeard at 01:33