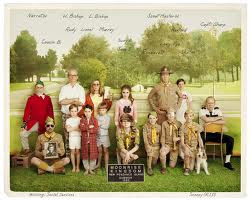 If I'd written this immediately after seeing it yesterday I might have been less kind, but following a night's sleep my feelings have mellowed a bit
It's a film I might otherwise have missed on purpose as I suspected that it was going to feature two of my pet aversions on film - not only a puppy-love liaison (here between a 12 year-old scout and his inamorata of similar age) but also I was dreading, having seen previews, a number of snotty-nosed little brats - here an entire scout troop of them. I was also expecting that as there were so many children featured we'd be subject to hearing ridiculously profound bon-mots tumbling out of the mouths of these emotionally precocious 'little dears', teaching their adult peers how life ought to be lived - something which gets my back up possibly more than anything else on film..
As it turned out, I've got to give it its due and say that my fears went largely unrealised - though the romantic liaison between the two runaways at the centre of the film did, at times, make my toes curl. (Perhaps that's because of the depiction of something I never experienced myself and to which I can't relate).
Other than the two young leads, it's a very 'bit-part' film. Among the adult players it's only Edward Norton who, as the earnest, put-upon scoutmaster, has a part he can get his teeth into. The others just drift in and out with hardly time to make an impression. I really wanted to see Frances McDormand in a bigger role - and, even moreso, Tilda Swinton, who up to now I've only seen in highly dramatic parts, though I doubt if she, in just two briefish scenes, was on-screen for more than a total of 3 or 4 minutes. I was also interested to see Bruce Willis in restrained fashion, which he largely was. I did laugh aloud at Harvey Keitel in brief appearances so uncharacteristic of his previous works - here all pomposity, moustache and short pants.
It's meant to be a quirky film, and so it is up to a point - though not as much as I'd liked. (For sheer, exuberant quirkiness I think the Coen Brothers films up to around the year 2000 were pretty unbeatable - though, sadly, rather less so since then).
'Moonrise Kingdom' is often a visual delight, parts of it quite stunningly filmed through yellow-tinted lens. I was also pleased with the use of the music of Benjamin Britten as soundtrack (a first in any feature film, as far as I know) mainly using his 'Noye's Fludde', a Biblical music drama written for performance by schoolchildren. It worked well.

This is the fifth Wes Anderson film I've seen. I thought 'The Darjeeling Ltd' had been so-so. 'Rushmore' and 'The Life Aquatic with Steve Zissou' both left me somewhat baffled.  The one I actively disliked throughout was 'The Royal Tenenbaums'  - which is also, incidentally, often spoken of with high regard.

I would rate 'Moonrise Kingdom' as marginally the best of his films so far.  If there hadn't been so much attention given to the cringeing 'young love' angle I might have accorded it a higher score. But all in all, I now award it a score of  5.5/10
Posted by Raybeard at 01:35