Was the film 'Bambi' to blame? 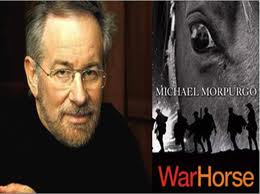 Big hoo-ha on this evening's news about the Royal Premiere in London of Spielberg's latest. The big man himself is there, complete with the titular four-legged star-'actor' in all its equine presence - and with Wills and the lovely Kate being the royal pair in attendance. (Btw: Good job the lovely Camilla isn't also there otherwise someone may mistake......No, I will absolutely NOT say it!)
'War Horse' is another major film I'm going to let pass by me for the reason of its depicting horrific suffering to animals - even though I know full well that any film coming out of North America, western Europe or Australasia would never have been made where actual pain had been caused to any such being. (The roof would cave in on the film-makers if it was made known or discovered to have taken place!)
Nevertheless, though I'm fully aware of this, just witnessing animals being shown as going through hardships and pain, even when contrived, is something I cannot bear to watch. At least human beings have a choice, they are getting paid and, should they be unintentionally injured, they will be compensated.
The film is based on the stage play of the same name which has been wowing critics for many months. I haven't had the opportunity to see it but in the 1980s I did see the Peter Shaffer play 'Equus' on the West End stage before the Richard Burton film came out. (It's been done again recently on Broadway with Daniel Radcliffe) On stage the horses were stylisedly played by actors carrying horse-shaped frames, in the same manner that horses are being depicted in the stage play of 'War Horse'. In the film of 'Equus' actual horses were used and though no animals came to any harm in the climactic and realistically shot horse-blinding scene, it had been intended to look real and that, for me, was a step too far - and I've not seen the film since or do I want to see it again.
Generally, seeing what is meant to depict the suffering of animals on screen is something I cannot abide. (There are, incidentally, other things which make me miss films, mainly because they just bore me to tears - boxing, in fact any films which features a sport in a big way, plus films with over-smart or wise-before-their-years kids teaching adults how they should live their lives.) 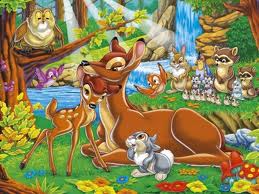 I think it all started with Bambi. Must have been about 8 or 9 years old when I first saw it at the cinema with my mum. It wasn't until decades later - when I was in my 30s or even 40s - that I discovered that one particular scene which had devastated me on that first viewing, but which I had kept bottled up during all the intervening years, not mentioning it for fear of being laughed at, had also traumatised many of those of my generation, and of both sexes.  Yes, it was that scene when Bambi is told that his mother has been killed. For years after seeing the film I wept inside, and possibly outside too, thinking "How could they do that to her? - and leave poor Bambi to suffer?"  Then I tried to rationalise it by arguing to myself that it was a way in which the film-makers were teaching children about the realities of life and death. Cruel, though it made a sort of sense. But even so, I was deeply wounded by the experience - and have never seen the film since. I wonder if that scene is having the same effect on young children seeing it on DVD for the first time? - or are they all inured against such scenes these days? But DVD doesn't have the immediacy and impact that a huge cinema screen had in my young days.
I cannot say that 'Bambi' is definitely the reason why I find witnessing the suffering of animals in particular, so hard to take. Most likely I'd be the same way if I hadn't ever seen the film. But the fact is, that particular film left me with a life-long mental scar which, in a peculiar kind of way, I'm actually content, even a little bit proud, to still bear.
But sorry, Mr Spielberg. I won't be tipping any of my money into your pockets for 'War Horse' - and besides, why do you have to have made such mawkish films in recent years. (The rot started for me  with 'E.T.' - a film I wouldn't see for a second time even if I was paid to!). Let's have another 'Jaws', 'Close Encounters' or even the wonderful 'Duel' please! - but 'War Horse'? No way, Jose!